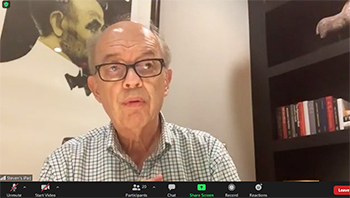 Steven Zumbach ('80 PhD economics) was the featured speaker at the Feb. 17 Econ Club meeting. He retired from Des Moines law firm Belin McCormick in December 2020 after four decades of service.

Though his list of professional and personal accomplishments is long and varied, he is most proud of two: his work on the Partnership for Prominence Capital Campaign with the Iowa State Foundation and his involvement with the formation of the Greater Des Moines Partnership.

"The Partnership for Prominence Capital Campaign was formed in the mid 1980’s. We hadn’t had a capital campaign in almost 20 years at Iowa State, which had serious financial issues. In that campaign, we had immense adversity. The president of the university and administration members of the Foundation had resigned as we were kicking it off. But Iowa State faculty, alumni, and friends were determined. We kicked off the campaign and when we finished it we raised $212M. That was the 12th largest public university campaign in history at that point."

"It was a stunning achievement. It demonstrated that people with will, determination and good ideas working together can complete a campaign. Three campaigns have followed, I’ve been involved with all of them and am currently one of the honorary co-chairs, along with my wife, of ISU Forever, which will have raised $1.5B by this June."

"The second is the formation of the Greater Des Moines Partnership. It is a configuration of local chambers of commerce but in one economic development group for all of central Iowa. That was in the early 2000s, and I was part of that formation and was chair of it in 2013. That organization has enabled us through economic development and all of its programs to help make greater Des Moines and central Iowa one of the most vibrant economies in the United States, with many national recognitions."

Zumbach has fond memories of his time at Iowa State.

"The wonderful help of talented, gifted, and committed faculty members and staff enabled me and others to get a tremendous education. It really prepared me for life. If you look at what I’ve done, it’s been problem solving, engagement, dealing with conflict, bringing people together, figuring out how to solve difficult problems where everyone at the table has a self-interest that they want to pursue, but are able to set those interests aside to pursue the greater good, to produce outcomes that make life better for all of us."