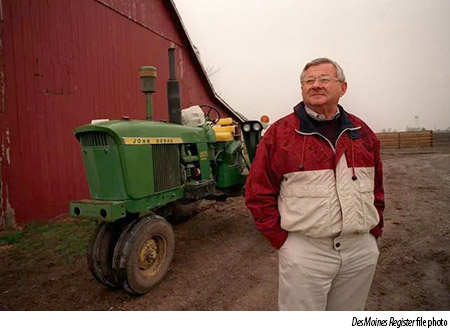 Neil Harl’s voice — literally and figuratively — was one of the most distinctive in the history of Iowa State University.

That wonderful instrument distinguished Dr. Harl as uniquely as his fingerprint.

His measured delivery and turns of phrase, the intelligence and sound thinking that went into each and every word, were an unforgettable part of many lives — students, colleagues, alumni, farmers and leaders of Iowa, the nation and the world.

It’s a voice you trusted. It reminded me of those old TV commercials for E.F. Hutton, in which someone would begin to mention what their broker was telling them. Suddenly, everyone in a one-block radius would freeze, lean in and try to overhear. Then came the voice-over: “When E.F. Hutton talks … people listen.”

Jack McClellan wrote about Harl's life in a Nov. 14. Iowa State Daily story, "Neil Harl died at 88 after a lifetime of impactful work in agriculture, law and economics."

“It is impossible to overstate the impact of Dr. Neil Harl on the field of agricultural law and taxation,” said Adjunct Assistant Professor of Agricultural Education, Kristine Tidgren, in an ISU Center for Agricultural Law and Taxation news release. “It is also impossible to put into words the legacy he left with his many students and the agricultural community at large.”

Dan Looker, Successful Farming, Nov. 17
Harl was best known for his outsized role in seeking a federal rescue of the Farm Credit System during the debt crisis of the 1980s. Some of his ideas made it into a $4 billion bailout signed into law by President Ronald Reagan early in 1988. Not all of that financial support was used and Farm Credit lenders have long since repaid their obligations. Harl also helped draft a farm debt moratorium law in Iowa.

Max Armstrong, Farm Progress America, Nov. 17
His name was in the news just about every day in the agriculture news back in the decade of the eighties. He was a distinguished professor at Iowa State with a long career in academia and he helped devise a plan to slow the demise of family farms during those dark eighties. Neil Harl urged banking congressional officials to allow farmers to restructure debt and his proposals helped create a pathway so farmers could continue operating and so lenders could at least recoup part of what they were owed without resorting to foreclosure.

Dave Elbert, Business Record, Nov. 19
Neil Harl, who died Nov. 4 at age 88, was quite possibly the smartest person I ever interviewed and definitely the fastest talker. Harl knew all there was to know about agriculture and finance.

He was a modern-day Alexander Hamilton, an economist and lawyer, obsessed with making capitalism work. He wrote, lectured and testified in Congress and around the world, authoring 29 books, including 15 volumes (10,000 pages) about agricultural law.

In 1981, as his national reputation was soaring, Harl did one of the most courageous things I’ve ever seen: he put everything he had—his career, the accolades, and his impeccable reputation—on the line to predict that fast-expanding farm debt and the just-passed Reagan tax cuts would bring economic calamity to rural America.

It wasn’t a guess; it was an act of conscience. In August 1981, he would write a decade later in his book The Farm Debt Crisis of the 1980s, he had spent weeks studying the Reagan Administration’s new tax cuts to update lecture notes. What he learned, though—when combined with the tight money policy of Paul Volker’s Federal Reserve—troubled him.