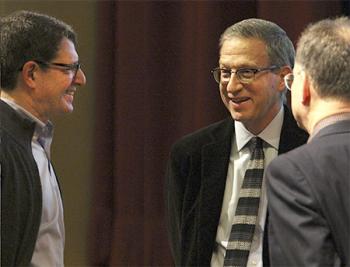 On Thursday evening, March 30, he spoke to an audience of about 120 at the Memorial Union on "Main Street vs. Wall Street: An Historical Perspective." (Read Iowa State Daily story.)

The following day he gave a noon talk at Heady Hall on "Banking Panics, the 'Derangement' of the Domestic Exchanges, and the Origins of Central Banking in the United States, 1893 to 1914."

Weiman, who has been a faculty member since 2001, is the faculty director of the innovative Empirical Reasoning Center at Barnard College and teaches core courses in Barnard’s distinctive Political Economy track and joint Economic and Social History Program. He is also an affiliated member of the Columbia History Department, and has been honored with the Economic History Association’s Hughes Prize for Excellence in Teaching Economic History.

He specializes in 19th- and 20th-century U.S. economic history and the political economy of contemporary U.S. criminal justice policy and the history of economic thought. His current research focuses on the evolution of the U.S. 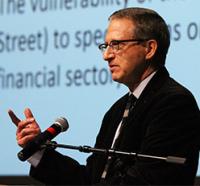 banking-monetary system from Jackson’s Bank War to the formation of the Federal Reserve.