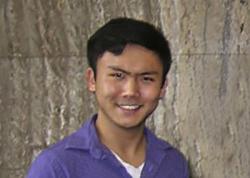 Mengyu “Allen” Wang, a third-year student with majors in Aerospace Engineering, Economics, and Mathematics, has been named a 2017 Goldwater Scholar.

Established by Congress in 1986, the Goldwater Scholarship recognizes students of outstanding potential who intend to pursue careers in mathematics, the sciences, or engineering research. The scholarship is considered the nation’s most prestigious award for undergraduates in STEM disciplines.

240 scholarships were awarded for the 2017-2018 academic year from a pool of 1,286 natural sciences, mathematics, and engineering students. Wang was one of four Iowa State students to receive the scholarship, tied for the most scholars selected for any university. The University of Alabama, Stanford University, and Princeton University were also represented by four students.

Allen’s application was coordinated by the Honors Program with added support from Amy Andreotti, Joe Colletti, Kevin Schalinske, and Gloria Starns, who serve on the Goldwater Selection Committee; and by his mentors, Christina Bloebaum, Elizabeth Hoffman, Thomas Ward, and James Ira Thorpe (NASA).