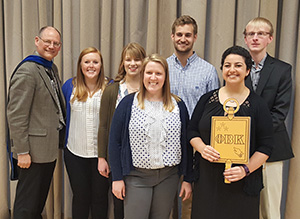 On April 30, 2017, eight economics department students were inducted into the Phi Beta Kappa honor society at a ceremony in the Sun Room at the Memorial Union. Phi Beta Kappa is the oldest nationwide liberal arts and sciences honor society. The organization honors high-achieving students for the excellence and breadth of their undergraduate scholarly records. One-third of the Economics Nobel Prizes have been awarded to Phi Beta Kappans.

On the program was the “Charge to the Initiates” by ISU PBK President Clark Wolf, the “History” by Dale Chimenti and the presentation of awards.