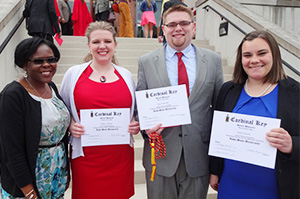 Cardinal Key was founded in 1926 to recognize outstanding leaders at Iowa State University. The structure and philosophy of Cardinal Key were modeled after a similar honorary known as Blue Key at Yale University. At the time, Cardinal Key was exclusively a men’s honorary up until 1975. It was then that it became required that all such honoraries be open to students of both genders.

Cardinal Key was founded upon the cardinal virtues of leadership, service, scholarship, and character. These four ideals continue to guide the organization. Cardinal Key membership is very exclusive, being limited to no more than ½ of 1% of the senior class, and 1/3 of 1% of the junior class. This year, only 73 student members were inducted; all of whom represent some of the finest leaders in the Iowa State University community. Due to the rigorous standards leading to their selection and high quality of student, faculty, staff and alumni members, Cardinal Key has been revered as Iowa State’s preeminent honor society.