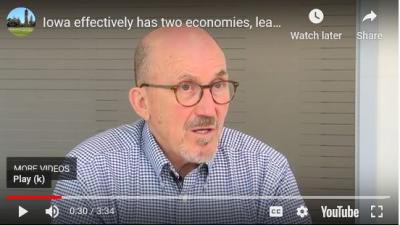 He also appeared on the Jan. 20 Radio Iowa program.
His research was also cited in a Jan. 22 story in The Guardian.

Amber Hall, senior producer for Politics with Amy Walter from The Takeaway (NPR), about Iowa economic issues for their upcoming caucus coverage.

Mike Hughlett, Minneapolis Star and Tribune, about the evolution of the ethanol industry and its importance in the Midwest during this election cycle.

Rod Boshart, Cedar Rapids Gazette, about economic and demographic issues that may come up during the state legislative session.

"“This decade Iowa grew more slowly than all of its neighbors — including rotten, corrupt Illinois,” said Swenson, playing off a theme often sounded at Iowa’s Capitol building. “Our economy was the sixth-slowest growing state in the United States this decade, so if these guys think they’re doing something, they’re wrong."