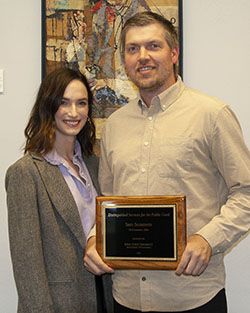 Sam Summers ('06 economics, marketing) received the Distinguished Services for the Public Good Award from Iowa State’s Department of Economics at the 2021 LAS Alumni Honors and Awards Ceremony on Thursday, Oct. 21, at the ISU Alumni Center. The award recognizes outstanding alumni from the department, which is in the College of Liberal Arts and Sciences.

Summers graduated with a bachelor’s degree in economics and marketing from Iowa State in 2006. While still a student, he established his first music promotion company, First Fleet Concerts. His dual degrees in economics and marketing have served him well as he expanded and grew his various business ventures. He now produces more than 250 concerts a year across Iowa, Nebraska and Minnesota.

Among other venues, Summers has promoted live music concerts at the Vaudeville Mews, the Val Air Ballroom, Hoyt Sherman Place, Wells Fargo Arena, Simon Estes Amphitheater, and Water Works Park in Des Moines, as well as venues in Dubuque, Cedar Rapids, Iowa City, Omaha, Lincoln, St. Paul and Minneapolis. He produced Iowa’s Nitefall on the River concert series and the annual three-day Hinterland Music Festival, starting in 2015. In 2019, the festival attracted more than 40,000 attendees from around the globe.

Summers and his partners opened Wooly’s in 2012. The following year, they launched the Up-Down Arcade Bar, Des Moines’ first arcade bar, and later expanded to locations in Kansas City, St. Louis, Minneapolis and Milwaukee. He also is part-owner of the Powered By Fries food truck in Des Moines.

This fall, Summers shared his entrepreneurial experiences with Iowa State students, discussing what he has learned about managing risk during the COVID-19 pandemic.

Peter Orazem, who nominated Summers, said at the Alumni Honors and Awards Ceremony:

During his visit with the Economics Club, Summers recounted a story from his early days as a music promoter.

He would book an act and a venue, but he did not have the money up front. That meant that he had to sell enough tickets to cover the talent fee, the venue rental, labor, and other expenses. With no assets in reserve, Sam had to learn how to manage risk. A single bad show would put him out of business.

The music business is incredibly fickle, and one night, Sam found that he had not sold enough tickets. He was going to come up short and his days as a promoter would be over. Looking over his options, he decided to go for the Hail Mary. He went to Prairie Meadows. He made enough playing poker to pay off his obligations and stay in business.

The lesson he left with the students? Never run your business where you have to win at poker to stay in business.

Sam has become a successful entrepreneur in a very difficult business. His aim is to improve the community by providing high quality entertainment, and his reach has ben impressive. He opened Wooly’s, a music venue, in a closed Woolworths store and helped start the East side revival in Des Moines, as well as opened a series of nightclubs in cities around the Midwest, employing over 800 people in the process.