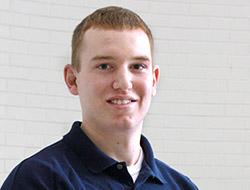 In high school Deitrich excelled at math, so an aerospace engineering major at ISU seemed like a natural fit at first. But he’d also taken a couple of economics AP courses and really liked the subject and his teacher. After looking into what he could do with an economics degree, he realized there were opportunities there, as well, so he changed his major. “There’s a lot of math in both aerospace engineering and econ,” said Deitrich . “But in econ you learn a lot more about the theory of economics, which I’m really interested in.”

His first economics course—Ron Deiter’s Econ 313, the economics of sports—inspired Deitrich . Later, he signed up for an undergraduate research seminar with Peter Orazem. Before one of the meetings, Deitrich watched the sports pundits on ESPN discuss how to draft the best football team. “They were talking about whether you go for the best player, or for the player with the highest competitive advantage over somebody else in the same position. The object of fantasy football is to “draft” NFL players at the beginning of the season, as if you’re the owner of a team, and then track all of their statistics. I thought that would be something you could study, that there would be some economics involved that I could use for a paper.” Deitrich proposed the idea to professor Orazem, who was very enthusiastic and sent him a two-page email, telling him what he needed to do to get started.

As treasurer of Econ Club, the junior has been impressed by the speakers who have come to the meetings. “All of them are ISU alumni. So it’s very interesting to see people who were, just a few years ago, where I am now. Looking at what they’ve done and their career paths is really interesting. It shows you there are a lot more options out there than you might think.”

One of the speakers, the associate athletic director here at Iowa State, talked about the economics behind what she does—getting funding for different sports and deciding how much funding each sport gets. Two alumni, who are now research economists with the Federal Reserve, spoke at another meeting. They talked about a research associate program that undergraduates can do for two years after they graduate. It’s a paid job as a research economist without a PhD.

“That sparked an interest in me, so, at least for now, that’s my goal after I graduate, though I do want to get an advance degree at some point.”