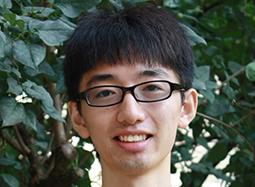 Yang He is from the small town of Changsha in central China. His major professor at Central University of Finance and Economics for his master’s degree was Haizheng Li, who is a professor at Georgia Tech School of Economics. One of his other professors, Li Yu, is an alumna of ISU who studied with Peter Orazem. She encouraged him to come to Iowa State because of the strong economics program.

He developed an interest in labor economics through his master program in China, which had a focus in that area. Later, he so became interested in applied econometrics.

“Applied econometrics is like a toolkit that lets you apply many models, many methods to solve empirical questions. Because labor economics is such a big field, and many times the questions we answer are not trivial, we have to rely on many sophisticated models, that’s why I became interested in those models. I cannot do too theoretical stuff, because I’m not trained to do that. That is why I study applied econometrics, where you need a strong background in mathematics and statistics. I’m still trying to learn that. My background is more in business,” said He.

He and Gaurav Arora were winners of the 2016 James R. Prescott Scholarship in Economics. His research, “Partially Identifying Treatment Effects with Misclassified Discrete Data” focuses on models that help identify treatment effect, which is essential for policy makers.

“Basically, I’m trying to come up with a method to do program evaluation, that is to say, to find out whether a program does have any effect. You know, many public programs have a specific goal, say, to reduce the crime rate or to help people improve their health state. My goal is to find a model to evaluate its treatment effect. Since as economists, we cannot do experiments, we can’t randomly assign those treatments to people A, but not to people B, we cannot just compare group A to group B and take the difference. This would give the wrong answer to this question. Instead, economists have to make some assumptions to answer the question. But the more assumptions, the stronger the assumptions you make, the less reliable the conclusion is. So what I do is find some middle ground. I’m going to use less assumptions, but it comes with a cost. I cannot pin down what is the exact true effect. I can’t give you a single number, but instead I can give you a range, say between one and five, but I can’t say it’s exactly equal to three. The good thing is that since it’s a set, it’s more reliable. It does not depend on very strong assumptions.”

After graduation, Yang He is a temporary instructor, research and teaching assistant at Iowa State.