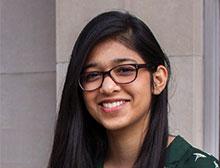 Shah started Iowa State as an industrial engineering major because she liked the combination of engineering and business. After taking some economics courses, however, she was impressed with the faculty and realized she found the subject much more interesting than engineering, and so changed her major to economics at the start of her junior year.

When asked about her favorite classes, she exclaimed, “Econ 431 with Terry Alexander! I just love the way he teaches, it’s applicable and approachable and he makes attending classes fun! I’ve had three classes with him from 102 to 302 to 431, and his teaching expands more than econ theories.”

She added, “Also, Econ 301, not only because it is one of the most important econ classes, but also because that’s when I first found out through Peter Orazem that there’s humor in economics. He’s not only a great teacher but also is an inspiration himself. I have come to think of him as my mentor.”

“His down-to-earth attitude and determination to work hard has been the best example to idolize as I soon begin my own career.”

It was through working on a research project with Orazem, and his encouragement, that she wrote her paper, “Explaining the Urban-Rural Wage Gaps in Developed and Developing Countries,” which explains the wage differences between urban and rural areas in 104 countries.

Her paper was accepted for presentation at the Undergraduate Research Conference in Dallas, Texas in spring, 2016.