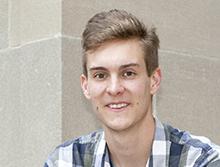 Major in economics, minor in statistics

This was not his first experience writing and presenting papers—this was his fourth conference—but this year was the first time he’s competed.

Last spring alone he participated in Research at the Capitol and the Honors Program Poster Presentation. He’s also taken part in the Economics Scholarship Program at the Federal Reserve Bank of Dallas.

Schneekloth says going to conferences is “helpful in developing communication and presentation skills. I get good feedback every time; I always come back home with a list of things to do to improve the paper itself. I think now we’re at the stage (with his latest paper) where we can probably publish it somewhere, given some revision.”

The paper started last summer. Schneekloth left Iowa State for a year-and-a-half to do co-ops, internships, and a study abroad, but he kept in touch with Professor Peter Orazem who’d taught his Econ 301 class. When he returned to Ames last summer, he joined the department as a research assistant working with Orazem.

Schneekloth authored his paper “Measuring and Explaining the Increasing Market Share of Large U.S. Farms, 1959-2012,” with editing help from Orazem and Katherine Lacy, a recent Ph.D. grad, with Professor Georgeanne Artz guiding him through the process. Schneekloth also received some help from the history department as well.

“We document with a new measure an increase in farm size over time and found that economic concentration and increasing farm sizes are positively correlated. That’s something that was overlooked in past literature. I do feel like we’re making some contribution to the literature.”

Schneekloth has already spent time in the economics department. He graduated with a B.S. in history, and minors in economics and political science in May, 2018. This year he is upgrading his economics minor to a full major, and adding a minor in statistics.

“History is a good tie-in to economics. Any sort of data set is historical in itself, so if you have the context behind things, it’ll help you better interpret the data. History is also good at building critical thinking and communication skills, which is transferable to any profession. Economics is more empirical, obviously, and gives you a different skill set.”

Right now, Schneekloth defines himself as a serious student that does research. As a senior, the majority of his time this year will focus on econ and statistics coursework that will apply directly to his research projects. It’s all designed with an eye toward being hired as a research assistant for the Federal Reserve System, where several recent department alums have found positions. Many of those who graduate from their program end up in top ten schools for their Ph.D.s.

“I’ve tried to diversify my education as much as possible. It’s taken six years, including the internships, so I hope it’s worth something. I’m just grateful that I’ve had the opportunity to do research as an undergraduate. I think this department does a good job of encouraging that. Especially Professor Orazem and Professor Artz, who do a good job at facilitating those opportunities.”