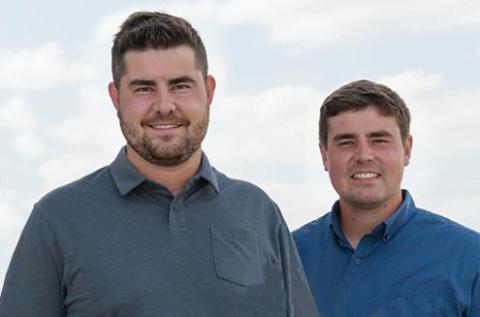 In Nevada, Iowa, Steve and Laurie Henry, and their sons Scott ('12 ag business) and Eric ('17 ag business) are carrying forward an enduring family legacy that stretches nearly seven decades. Every decision at LongView Farms is made with a focus on the future and respect for the past, and the team’s strategy revolves around being progressive, thoughtful and disciplined.

A Strong Foundation
In 1988, Steve began farming 255 acres of his family’s land. He had spent several years in Nebraska working as an agricultural loan officer, while Laurie worked as a conservation and wildlife program coordinator. After his father retired, Steve assumed responsibility for the family operation in 1993.

“Before I came back, I learned the importance of understanding finances,” Steve says. “Fortunately, my off-farm career let me see many different models of success. I also saw things that didn’t turn out the way farmers wanted, and it was just an opportunity to grow. We need those opportunities to grow.”

Steve and Laurie set a goal to better understand their financial positions. They wrote their first business plan for their corn-and-soybean operation in 1997.

“By maintaining records each year, we are able to learn what we have done well and where we have failed.”

Pillars of Scope and Scale
Experience taught Steve and Laurie that continual growth — both in scope and scale — is a key success trait in farming.

“Having three sons and the dream to share my love of agriculture meant growth was important, not just to be a larger farm, but to have the ability to allow them to pursue the farm as career path,” Steve says.

As the Henry boys graduated from Iowa State University, Steve and Laurie asked them to work elsewhere to gain new experiences. They also monitored their debt load to make sure their long-range plans provided a good path for their next generation, says Johnne Syverson, a professional with Syverson Strege.

“Succession planning has been part of their planning for 15 years and is now paying off as the next generation begins to take over the reins,” Syverson says.

Scott became a partner in 2014, followed by Eric in 2018. (Their brother Kyle is an attorney.) They filled specific roles and started multiyear leadership development plans. These clear expectations and business best practices are big reasons the two brothers are on the farm today.

“What interested Scott and me in coming back was our parents’ move to professionalize the farm,” Eric says. “They built the office, and I was much more excited to work here than back in my mom and dad’s house.”

“As a kid you often don’t see the business side,” Laurie adds. “We were professional before, but we didn’t tend to talk about the number-crunching side at dinner. Being able to share that really opened their eyes that farming was more than running a tractor.” 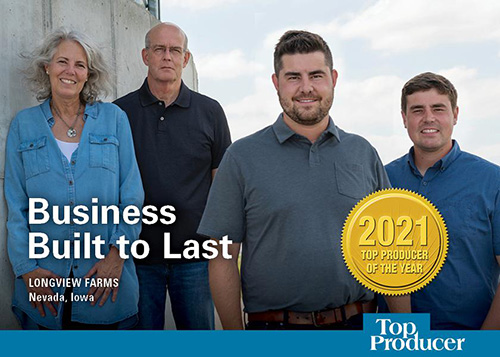 Divide and Conquer
Today, the Henrys divide and conquer running the farm. Steve serves as CEO, providing big-picture vision. Laurie focuses on accounting, grain marketing and record management. Scott directs business growth and process management. Eric is taking the lead on many of the operational duties.

In their roles as partners, Scott and Eric have management responsibilities and farm ownership.

“That ownership is key because ultimately it’s not just given,” Scott says. “It’s something that’s also earned. One of the things I give my parents credit for is they’ve always said they want the next generation to feel a part of what we’re doing and that their opinion is valued.”

Scott and Eric have been able to spread their wings by exploring new diversification avenues for the farm.

“We need to be looking beyond agriculture and how can we be sustainable in a period where Iowa may not always be corn and beans,” Laurie says.

Scott and Eric, along with their brother, have invested in pork and beef enterprises. They contract finish 15,000 hogs at three sites and acquired a cattle feedlot.

“I’ve really focused on how we can continue to not only grow in acreage but diversify,” Scott says.

As the Henrys explore new enterprises, they ground their decisions to financial metrics and long-term goals. Their goal is to be proactive, rather than reactive, says John McNutt, a management consultant with LattaHarris.

The Henrys use a farm-forecasting model to run multiyear scenarios, quantify the effects on income and track enterprise activity. This is all possible because of the family’s dedication to financial best practices, McNutt says.

“Whether through seed production, livestock enterprises, land acquisitions or investments in alternative projects, the Henry family is creative, thoughtful and disciplined about how they look at growth,” says Lance Woodbury, a principal with K•Coe Isom.

Business of Being a Family
Annually the Henry family meet with an outside facilitator to discuss “the business of being a family,” also known as a heritage day.

“Not every family member is involved in the farm, so we spend time at these sessions discussing issues that impact every member of the family,” Steve says. “Topics can range from rent on family-owned ground to career transitions to non-farm investment ideas.”

The day’s events can also include education, leadership development or family philanthropic projects.

The LongView team sets goals each year. A few of their constant focuses include:

As the Henrys dream about what’s ahead for their operation, they follow a simple mission: Honor the past, steward the present and look to the future.