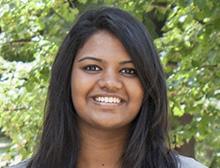 Sanjana Ravi presented her paper “The Scarring of Youth Joblessness in Sri Lanka” for the Undergraduate Research Conference, held in Dallas, Texas in April, 2017.

As a high school student in her hometown of Colombo, Sri Lanka, Iowa State economics senior Sanjana Ravi realized science wasn’t her strong suit. That’s the reason she pursued the “commerce” stream of study, which consists of mostly business courses. She loved the economics courses and when she graduated, she knew she wanted to apply to universities where she could continue her study.

Ravi considers herself a people-person. Growing up in Sri Lanka’s capital city, she experienced discrimination daily, but fortunately was not directly impacted by the country’s raging 26-year civil war.

“The terrorist group there used many child soldiers and they treated children and women very badly. I grew up hearing stories and watching it on the news, so I knew that people suffered a lot. I wanted to be a part of helping my country.”

She knew studying international studies would help her learn about global problems, and having a background in economics would help her focus on global policies. She chose Iowa State because of its reputation and because it’s one of the few schools where she could have a double major in those two areas.

“There were two graduates from my high school who were already here at Iowa State, so I knew people and could connect through them. Because Iowa State is so big and has so many organizations and clubs to get involved in and a decent international population, I knew I could fit in. All those factors played a big role in choosing Iowa State.”

“The place that I grew up is a very populated place; I would have expected me to be a city girl. But I have no regrets in coming here. One of my biggest surprises was how agricultural it is. Literally, as soon as you step out of Ames, driving down the highway it’s all cornfields.”

As a freshman, Ravi knew the best way to get to know people was to get involved in her dorm, where she has made many close friends. Now, as a senior, Ravi is very involved in being a community advisor at the Geoffroy residence hall.

“I know a lot of freshmen come in and feel homesick and want to go home every weekend. I didn’t have that opportunity because home is 8,000 miles away. My own community advisor did such a great job in helping me feel comfortable and never feeling homesick, so I want to help people feel the same way. I want to make them comfortable, to transition from high school to college, and do well academically.”

Ravi is also a member of the Econ Club, and Alpha Kappa Psi, a business academic fraternity. She hopes to use what she learns about business and networking in her future career. Last fall she declared a minor in Women’s and Gender Studies and will be starting research with one of the professors there next fall. She’s also a Catt Center associate and attends Margaret Sloss Women’s events and programs.

After graduation, Ravi hopes to work for a year before pursuing a master’s degree in international relations. One of her long-term goals is to work for UNICEF, but that’s down the road. She’ll need years of work experience under her belt before she can apply. Right now, she’s looking at Human Rights Watch, a nonprofit, nongovernmental human rights organization.

“I want to be out in the field, helping people, somehow making an impact on people’s lives every day, fighting for human rights or children’s rights and helping people learn that education is the key for everything.”

Ravi presented her research poster, “The Scarring of Youth Joblessness in Sri Lanka” at the Undergraduate Research Conference in Dallas, Texas.

PhD candidate Murali Kuchibotla, who worked with Peter Orazem to create the data set, wrote the paper. With Orazem’s help, Ravi finished the research, produced, and presented the poster at the conference in April, 2017.

It focuses on scarring, which is the term used when an individual's long-term employment prospects suffer because of their state of joblessness in the past. This situation has hurt a lot of the youth in Sri Lanka.

“There were around 12 of us who took part in the poster session, I was the only one from Iowa. It was more informal; people would come up and ask questions about your poster. I got more exposure to Americans outside of Iowa--I had professors stop by from the University of Louisiana, Kentucky, and Texas. It was very interesting to meet these people from the South. And I was very proud to be representing Iowa State and Iowa.”