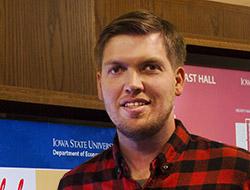 Summers started his first music promotion company, First Fleet Concerts, while still a student at ISU. Among other venues, he promoted several music shows at the Vaudeville Mews in Des Moines, later partnering with owner Amedeo Rossi to produce the Nitefall on the River concert series. The inaugural Hinterland Music Festival, in 2015, is his latest musical brainchild.

In 2012, he opened the Des Moines bar, Wooly’s, with partners Josh Ivey, and Rafe Mateer. The following year the trio opened the Up-Down arcade bar in Des Moines, with a second location in Kansas City in 2015. In 2014 Summers and several partners also ventured into another avenue of the restaurant business, with the Powered by Fries food truck. Summers agreed to be a guest speaker at a recent meeting of the Economics Club at Iowa State.

You started promoting music concerts as a high school student. Was it hard to get started in this industry?

I would say it’s tough at first getting people to accept you. It’s a very long process to get to the point where these agents will sell you shows. Now I have no problem talking with them because I’ve developed relationships with these agents where they’re going to work with me. But if someone else came up to them, it would take them some time, because it’s so much of a relationship thing.

How did you come to study economics at Iowa State?

I went to high school in Johnston, Iowa, so I was close to Ames, and a couple of my friends were coming to ISU. When I was in high school, I used to buy broken electronics, fix them, and sell them. I took a class at DMACC and thought maybe I could do this. So when I started at Iowa State I signed up for electrical engineering, but it ended up being a lot more science and whatnot than I really wanted, so I switched to undecided. Later, I liked business and I liked economics and I just chose the one that didn’t require business law—I saw how thick that book was! I ended up doing a second major in marketing. And I use both of those every day. I took a lot of stat classes and mathematics, and I use a lot of that in my work too. But I don’t think that your career has to be defined by what you studied in college. So many people aren’t doing exactly what they went to school for. College is sort of there to help you realize what you want to do after college.

What advice would you give students who are interested in starting their own business?

When I was young, I liked making money; I looked for golf balls and sold them to golfers on the tees, or I’d collect hedge balls from their trees and go sell them in the neighborhood—when you’re young you can sell anything. And I was just always scheming to sell anything—car washes, snow shoveling. My mom reminds me that when I was young, instead of charging by the driveway, I’d charge by the size of the drift. I mowed ten lawns when I was 12 to 14 years old. Later on, when I had a job at a grocery store, I’d observe my boss checking the numbers and how sales were doing. So I was always very interested in the numbers in how the store was doing, I’d sneak on the computer when I was printing out the signs. Numbers have always been really interesting.

That would be my advice—start working young. You see people who are lazy and it all kind of leads back to what they did as 14- to 18-year-olds. The people who went and got the job right away, are the ones that know how to grind. They’re working a job in college, making it work, and paying for that stuff. So it’s important having a job.

Networking and being involved in clubs is important too. That’s kind of how I met most of the people who were like minded, hanging out in those circles, including the Economics Club. I’m interested in things that revolve around economics and that stuff is important to me, and that’s why I appreciate the degree. Economics has just kept me interested in everything that’s going on in the world, that’s the biggest value.

Sam Summers ('06 economics, marketing) received the Distinguished Services for the Public Good Award from Iowa State’s Department of Economics at the 2021 LAS Alumni Honors and Awards Ceremony on Thursday, Oct. 21, at the ISU Alumni Center. The award recognizes outstanding alumni from the department, which is in the College of Liberal Arts and Sciences.

Peter Orazem, who nominated Summers, said at the Alumni Honors and Awards Ceremony:

During his visit with the Economics Club, Summers recounted a story from his early days as a music promoter.

He would book an act and a venue, but he did not have the money up front. That meant that he had to sell enough tickets to cover the talent fee, the venue rental, labor, and other expenses. With no assets in reserve, Sam had to learn how to manage risk. A single bad show would put him out of business.

The music business is incredibly fickle, and one night, Sam found that he had not sold enough tickets. He was going to come up short and his days as a promoter would be over. Looking over his options, he decided to go for the Hail Mary. He went to Prairie Meadows. He made enough playing poker to pay off his obligations and stay in business.

The lesson he left with the students? Never run your business where you have to win at poker to stay in business.

Sam has become a successful entrepreneur in a very difficult business. His aim is to improve the community by providing high quality entertainment, and his reach has ben impressive. He opened Wooly’s, a music venue, in a closed Woolworths store and helped start the East side revival in Des Moines, as well as opened a series of nightclubs in cities around the Midwest, employing over 800 people in the process.