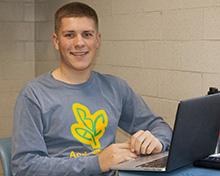 Caring Mentorship, Room to Grow
Riley Arthur is on the run. The junior majoring in agricultural business and economics is chasing not just a degree, but the full-blown Iowa State experience.

The job kept him moving. As a commercial merchandising intern, he traveled to four of the company’s ethanol plants in Iowa and Nebraska, as well as to the company’s headquarters in Wichita, Kansas, to learn about marketing distillers grains, a co-product of the ethanol process.

Arthur continues his fast-paced schedule on campus. This is his second year as a peer mentor for agricultural business freshmen, something that he feels strongly about.

“They really get ag bus students off to a strong start. Peer mentors fill in the gaps between classes and dorm life, and serve as resources for students,” he says. “They were so valuable to me as a freshman.” 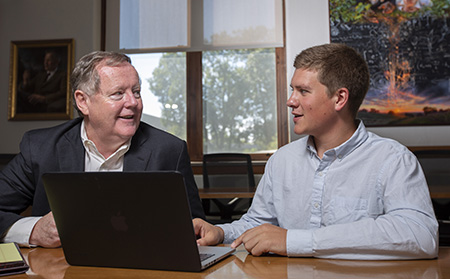 Along with adviser Ebby Luvaga, he and the other mentors meet with their student learning teams to answer their questions, help them develop four-year plans, and prepare for Career Day and internships.

Arthur also makes time to serve as a CALS Ambassador and an officer in the Agricultural Business Club. As the club’s Senior CALS Council Representative, he co-chairs the CALS Week committee and coordinates the Pre-Career Day Mixer.

Training for leadership
On top of his full schedule, Arthur is further developing his leadership skills by attending classes as part of the Vermeer International Leadership Program.

“It’s a year-long program that intensely focuses on leadership, not just from a university perspective, but from an international and cultural perspective. We get to travel to one of their company facilities in the Netherlands during spring break 2019,” says Arthur.

Receiving several scholarships has also helped Arthur excel. As a freshman, he received the Dean’s Leadership Scholarship and participated in the Dean’s weekly leadership class led by then-dean Wendy Wintersteen and associate dean David Acker. He soaked up everything and still talks to now-president Wintersteen a couple of times each semester.

An exciting bonus of the Dean’s scholarship? A grant allowing Arthur to do research as an undergrad. He’s been working with Dermot Hayes, who specializes in agricultural markets in the United States and China. Hayes is the Pioneer Chair in Agribusiness and a Charles F. Curtiss Distinguished Professor in Agriculture and Life Sciences.

“Riley is a self-starter who does excellent work,” says Hayes. “He also manages his time very well. In addition to other work, he initiated a project to understand how changes in China’s ethanol policy would impact world corn markets.”

“Dermot doesn’t micro-manage what I’m doing. He basically lays out a question that he wants me to answer, then it’s my job to go figure out how to answer that question,” says Arthur. “Early on, he differentiated research from the classroom: in research—unlike in the classroom—the professor doesn’t know the answer. So, I must be confident that the results I present to Dermot are accurate.”

Arthur must be getting something right. His name appears with Hayes’ on an October 2017 Center for Agriculture and Rural Development article on China’s E-10 mandate.

After graduation, Arthur plans to work in industry for a few years and then look at pursuing a higher degree.