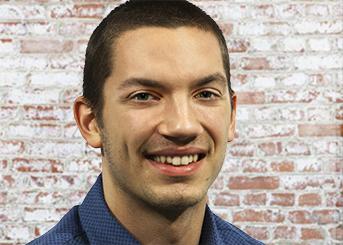 For a man who once took a vow of silence for a month, Ph.D. student Paul Pelech has no hesitation sharing his rewarding experiences as a Cyclone.

Influenced by mission trips earlier in life, Paul was inspired to study economics and follow a career path that would allow him to help struggling communities.

After completing his undergraduate degree in economics at Purdue University, he applied to nine economics Ph.D. programs across the country. He chose to come to Iowa State because it was the best offer he received. Getting into graduate school is one of his proudest accomplishments.

Paul's goal is to become a professor in his field and aid in policy changes that take into account human preferences and their impacts on the economy.

His passion for economics is much more than the mathematics behind supply and demand. From his point of view, economics is about the concept of scarcity and using math to study human behavior.

When he isn’t teaching courses, grading, or studying, Paul enjoys watching and reviewing movies. It is a method of escape that allows him to tap into his creative side and relax. He is also working on completing a novel and hopes to publish it.

In addition, Paul is a member of the Iowa State Crew Club. His experience with rowing started back at Purdue, where he was on the team for two years. He also continued to train in Austria when studying abroad as an undergraduate.

Paul has been at Iowa State since fall 2017 and plans to graduate between 2022 and 2023. His work ethic is demonstrated through his research pursuits and involvement on campus. Iowa State is lucky to have him as a member of economics department.