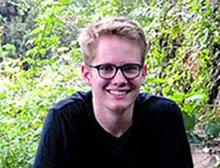 Ames native Neil Gerstein’s interest in international issues took root growing up in a family that traveled often. After taking four years of German in high school, he spent a month as a foreign exchange student in that country. His only disappointment with his experience was finding that English is so widely spoken there, that his German language skills were practically unnecessary.

But the experience fostered his interest in world affairs and determined his eventual hybrid major at Iowa State in economics and global resource systems (an interdisciplinary development-focused major, first offered in 2009).

A desire to be fluent in a second language other than German prompted Gerstein to take two years of intensive Mandarin Chinese at ISU in preparation for his next trip. Knowing that less than one percent of the population of China is fluent in English, the honors student was determined to master the language that the U.S. State Department ranks (along with other Far Eastern tongues) as one of the most challenging to learn.

For one month in the fall of 2013, Gerstein traveled to Zhejiang University in Hangzhou, China, where he collaborated with students on an economic research project. The following summer, he became an exchange student to prestigious Tsinghua University (nicknamed the Harvard of China) in Beijing and a member of the Rural International Student Exchange (RISE), a student organization that focuses on water pollution problems in rural China. He also served as a Humanitarian Awareness Committee Member on the International Student Council. Despite the vast cultural differences he encountered there, he was surprised how quickly he adapted to the Chinese student lifestyle.

Back at ISU, his interests in development and human health sparked his involvement with research started by Peter Orazem and Janet Horsager, who had collected the data on agricultural production by country. His senior project, doing double duty as his honors capstone project, resulted in his abstract being accepted by the Midwest Economics Association. He presented his paper at their annual meeting in Minneapolis.

“My project studies how using the appropriate technology can alleviate world hunger caused by poverty. By looking at the ratio of skilled to unskilled labor in a country’s population, and circumstances that prevent the use of western advances, the information can point to technology that would be better used to increase the country’s food supply.”

The ISU senior’s future plans include grad school, but he hasn’t yet picked a school or a specific field; he’d love to study abroad. But wherever he goes, it will most likely involve one or more of his passions: economics, public health and bioinformatics, a combination of biology, statistics and computer science.