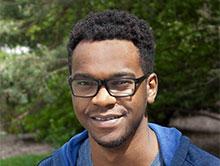 When Melvin Masinde was in high school in his native Kenya, he was interested in subjects that explained the world—geography, science, and economics—that relate data to the real world. Math was secondary.

“I was also attracted to architecture, not the technical drawing aspect so much, but more the community and urban planning, policies, and everything that affects urban landscapes.”

After graduating from high school, Masinde moved to the US, majoring in economics at Minnesota State University. In his sophomore year, he transferred to Iowa State, adding a second major in community and regional planning.

He soon adapted to life in the Midwest, which was very different from his very densely populated hometown of Nairobi. He realized that there was much less free time here and that things focused more on building credentials to find employment.

Masinde became active in the Economics Club, attending meetings and going with the group to the Berkshire Hathaway Annual Shareholders Meeting in Omaha. While there, he talked with Peter Orazem, professor and club advisor, and ended up doing research with him during the summer of 2016.

Later, as part of Orazem’s Econ 490 independent study class, Masinde worked with classmate Jasmine Francois on research that would culminate in their paper, “Retail Firms Sales, Entry and Exit in Rural and Urban Markets, 1991-2011.”

“That class was very helpful; Jasmine and I did most of our research work in that class. Peter gave us guidelines, what we should look for, and what we were trying to accomplish in the paper we were going to present.”

“We looked at factors like income and employment in all 99 Iowa counties, and how those things might influence fluctuations in retail sales. This dataset was available from the Iowa Department of Revenue and Finance. Georgeanne (Artz) helped us with using the statistical software STATA and Leisl Eathington helped us aggregate the county data.”

When they finished their work, Masinde and Francois submitted their paper to the Midwest Economics Association. It was accepted and Masinde traveled to Cincinnati in March 2017 to present it at the group’s annual meeting.

“I was excited the whole way through, until I had to present. It was very helpful though, because the people who were organizing and moderating the sessions were other university professors, so it was just like a normal classroom environment, and not as intense as I thought it would be.”

“The feedback that they give you during the presentation was very helpful. Things like something you may have overlooked or that might make the paper better. I’d definitely do it again, it was a learning experience.”

Masinde will be attending graduate school at Iowa State in the fall, studying community and regional planning.

“In applying for grad school, you have 300 words to describe what you have done and what you hope to do. You definitely have to think about it and reflect on exactly why you want to go.”

“And when people give you insight, feedback on what you’ve done and how you might improve yourself, it’s something that is beneficial to you.”