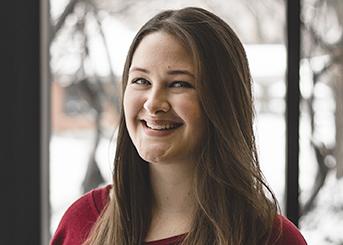 Several years of speech and debate at Winterset High School came in handy for Lucy Dougherty this year at Iowa State. That experience prompted her to get involved with the Model European Union team here, which recently traveled to the annual competition at the University of Indiana in Bloomington.

“Model EU is a Poli Sci class tied to a club. It’s kind of treated like a club, in that it’s a little more informal, but we still have class and get credit for it. It was a rebuilding year so we were really happy with how things turned out, a lot of people did really well.”

“I actually want to go to law school in the future, so I researched majors that help you get into law school, and economics was right at the top. Before taking the classes at Iowa State, I didn’t realize how much I’d like economics. I kind of stumbled into it accidentally.”

Her interest in economics led to her research project, which she started the second semester of her freshman year, after taking Econ 301 with Professor Peter Orazem.

“As a freshman, of course, I didn’t really know what I was doing. I’d had theory of econ classes, but I didn’t know how to put that to any practical use. I was in the Honors Mentor Program with Dr. Elizabeth Hoffman, who does research  in behavioral economics, so I got to primarily observe, but also assist in a couple little things with her project. I thought the things she’s doing with gambling and risk behavior were really cool, so I wanted to do something like that.”

So she took her idea to Dr. Orazem.

“I wanted to test the likelihood of people taking risks or gambling after seeing someone else win the same game. So we talked about it and came up with the idea of using lottery data to test that. It wouldn’t exactly test risk behavior, but was a similar idea. We called up the Iowa Lottery and they sent me data on 32 winning stores—ones that had sold a winning ticket worth over a $1 million. We had control stores in the same zip codes. Then we looked at sales before and after the win to see how likely it was that a winning store would have increased sales after they had a win. Obviously, they shouldn’t, because it doesn’t make sense. But they absolutely do.”

Dougherty got her feet wet in research during her freshman and sophomore years. While Peter Orazem was gone to Slovenia for a semester, she took a break from her research, concentrating instead on the Bank Case Study research. This year, she picked it back up, and, after taking econometrics, was able to do a lot more, even presenting her paper at the Midwest Economics Association Conference in St. Louis in March, 2019.

“I was really nervous, I didn’t know any of these people. I thought it was going to be really serious and stressful, but it was such a welcoming environment. When I went up to present, everyone was so friendly and nice. It was a really good experience. I think anyone who wants to go to grad school, should try to do it.”

Dougherty said she’s thought about grad school after graduation next year, but doesn’t have the math background right now. She’s looking at doing something else first, possibly a research program or, if possible, getting a research assistant position at the Federal Reserve Bank before law school.

It’s nice to have another year, because the paper’s a work in progress, and I want to tweak it and perfect it before I submit it to the Undergraduate Research Conference in Dallas and a couple more competitions next year. I’d like to try to get more exposure with it, make it a little better, and increase my chances of being able to experience the other side of economics first.