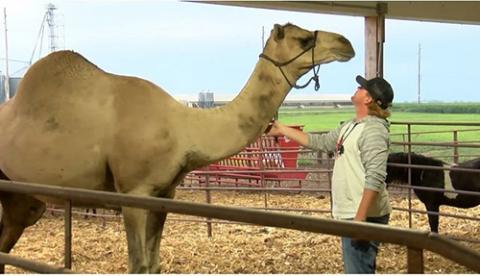 An Oelwein farmer has expanded from just the typical corn and cows we all are used to seeing. There are some animals that are pretty unique to the Red Rock Farms that some even call the farm a zoo.

"I mean, just the love for animals, in general, is what's got me to this point," Red Rock Farms Owner Landon Kane said.

A farmer turned zookeeper, Landon Kane owns a variety of horses and cows as well as other animals that are a bit unusual for a farm in Iowa.

You can find a pumpkin patch and corn maze at his farm in the fall, but year-round there are llamas, mini potbelly pigs, swans, a zebra named Barcode, and a camel with the name Joe.

"He showed up and I couldn't ask for a better animal. He's just a huge dog," Kane said.

The idea to open the zoo first came up at a time when farmers weren't getting as much for their produce and livestock, but Kane says he more so wanted to pursue his love for animals.

The Red Rock Farms have been open since the 1970s but the "zoo" portion opened its doors to the public in 2019, and caring for the animals is much more than a full-time job.

"We get rolling at about 5:30 in the morning and it's 8, 9,10 o'clock at night before we get done for the day to make sure everyone else has got a good clean bed to lay on before we do," he said.

If his own animals weren't enough to handle, Red Rock Farms also recently opened the Ruff House, where dog and cat owners can leave their pets when going out of town.

"Now that everyone's starting to travel they're leaving so we're getting to board a lot of dogs," Kane said.

The Ruff House opened in April of this year, the perfect time, as COVID-19 restrictions are almost non-existent and people are starting to travel and leave town more.

When people visit the zoo farm, the main focus is educating guests on agriculture.

Over the summer, the public can schedule visits to see the animals, but in the fall is when "Fall Fest" occurs and Red Rock Farms is open to the public for a few weekends. That is when the majority of visitors come through the farms to pet the animals and enjoy other fall activities.