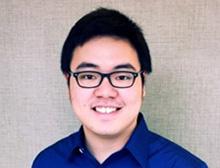 Tan, or “J.R.,” as he likes to be called, attended a British style high school in his hometown where he concentrated on biology, physics, and chemistry along with three languages—Mandarin, English and Bahasa Malaysia, the country’s national language.

“We had to take ten subjects and the exams were cumulative for the last two years. It’s very exam-based, we don’t really have quizzes or assignments. I think we have four exams each year, which determines what classes you go to. I was very involved in Chinese orchestra; training was 8-5 every day. I played the Chinese violin, but unfortunately, I was not very good.”

After high school, Tan went to community college and earned enough credits to transfer to Iowa State as a junior.

“In community college, you just declare science or business. I was on the college’s sales support team, which is college students that work closely with the sales and marketing department. We went out to high schools to promote the college.”

“My parents and my aunt wanted me to study in the US, because most of the prestigious colleges are here. My aunt lives in San Francisco. She worked for Motorola back in Malaysia, and they sent her here and provided her sponsorship, so she was very lucky. She continued to work for them for 20 years and then retired.”

Tan wasn’t able to visit college campuses, so he learned about universities online. He chose Iowa State because of the reasonable tuition, and easy application requirements, but mostly because of its high ranking.

He feels fortunate to have taken Econ 490 with Dr. Peter Orazem because it gave him the opportunity to do a research paper that he submitted and that was accepted for the Midwest Economics Association’s meeting in Cincinnati in April 2017. Because he was interested in researching sports, he teamed up with another sports fan, classmate Gerald Healy.

“The most fascinating thing I got from this research is it is so boring to look at the raw data in an Excel sheet, but once you put it in a statistical program, and run a regression, oh my God, you can see all the coefficients, and how things change throughout the year. It’s just so amazing. You can tell the trends, and you can explain the situation and what happened from this year to this year.

“For our research, we learned that because of revenue sharing among the teams in a league, local population does not seem to matter much, so it really doesn’t matter if you move to a very populated city if you want to gain higher price cost margin, which is the market power. You can stay in a relatively smaller city and still have a high market power, it doesn’t make sense, but the data prove it. That is fascinating stuff.”

“At this conference, I got a lot of input from the professors in the peer review on how to improve our data sets. They were very helpful—not like at the graduate student sessions. They questioned their data and work and were really hard on professionals and graduate students. Fortunately for the undergraduate students, they are more about giving out constructive suggestions.”

This summer, after graduation, Tan will look for a job. Right now he is looking at banks and insurance companies, but is leaving his options open.

“Because I’m an international student, I can only work in the US for a year without a sponsor. If I’m fortunate enough, I’ll find a company who is willing to sponsor me and then ask me to continue to work for them. The current administration is cutting back on H1B visas, especially in the tech industry, which is most concerning. My advisor says that for me to get this, I need at least a master’s degree.”

“My final goal will be publishing this paper so I will have a head start in graduate school. That’s my parents’ goal for me—to go to grad school.”