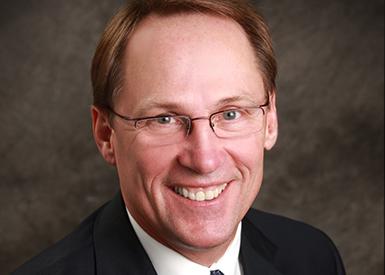 Jeff Plagge ('78 ag bus), president & chief executive officer of Northwest Financial Corp (NFC), was awarded the ISU Alumni Association's 2020 Floyd Andre Award.  Established in 1978 to honor a College of Agriculture and Life Sciences alumnus or friend who has made outstanding contributions to production agriculture, agricultural business or has had a significant impact on Iowa agriculture

Jeff Plagge’s impressive career spans more than 40 years and has positively impacted all levels of Iowa’s banking industry. In 2019, Plagge was appointed superintendent of the Iowa Division of Banking by Iowa Governor Kim Reynolds. In this role, Plagge leads the regulation of all state-chartered banks and has regulatory and licensing authority over Iowa lenders, mortgage businesses, real estate appraisers and appraisal management companies.

Plagge’s expertise has been sought after at a national level via service on boards and committees for the Federal Reserve Bank of Chicago, American Bankers Mutual Insurance, Sheltered Harbor, The Clearing House, and the American Bankers Association. Locally, his service includes leadership positions on the boards of Delta Dental of Iowa, the American Red Cross Central Iowa Chapter, and the Iowa Banker’s Association. He currently serves on the board of directors for Northwest Financial Corporation and its subsidiaries.

Plagge was appointed by Gov. Reynolds to serve as superintendent of the Iowa Division of Banking. Plagge begins his new role when Ron Hansen steps down on Sept. 16, 2019.

“Jeff is a proven leader with deep insights into the banking industry, especially when it comes to balancing consumer protection with regulatory oversight,” said Gov. Kim Reynolds. “He believes in building trust, exchanging ideas, and staying on the forefront of industry changes. Jeff will do an outstanding job in his new position.”

Ron Hansen has served as superintendent of banking since November 2015.

“Ron has been a dedicated public servant who is a valued member of my Administration.  In the months ahead, he will play a significant role as we transition to a new superintendent,” Gov. Reynolds continued. “We’ve been fortunate to have him at the helm for so many years. I wish him all the best as he returns to the private sector this fall.”

“It has been a privilege to serve as superintendent of the Iowa Division of Banking,” said Ron Hansen. “I appreciate the opportunity provided by former Gov. Branstad and Gov. Reynolds and am proud to have worked with them as well as the talented and dedicated employees of the division.”

Jeff has served as the chairman of the Iowa Bankers Association and the American Bankers Association, as a board member of the Federal Reserve Bank of Chicago, as the chairman of the Community Depository Institution Advisory Council for the Chicago Federal Reserve and as a member of the same Council for the Board of Governors. Jeff graduated from Iowa State University with a bachelor's degree in Agricultural Business and a minor in Advertising and Public Relations. He also completed the Colorado Graduate School of Banking program.