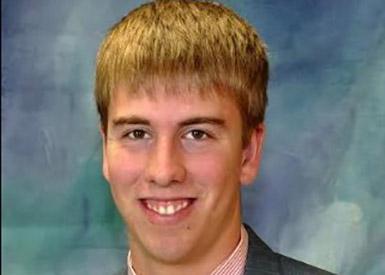 A new business has taken up residence at the old factory outlet mall in Story City, and its mission may surprise you. Midland Co. is a seafood company using sustainable, environmentally friendly methods to raise shrimp for Midwestern customers.

“People are certainly interested when you tell them you’re raising shrimp in an old mall in the middle of Iowa,” said Jackson Kimle, founder and president of Midland. “Rather than buying Wrangler jeans or something like that, you’re buying shrimp.”

He expects the company’s first harvest will take place late this fall or early this winter with a yield of about 500 pounds of shrimp. They’ll be big shrimp, so to speak, with a count of between 15 and 20 per pound.

Midland Co. is occupying 20,000 square feet of the former mall, located at 324 Factory Outlet Drive, which is about a quarter of the building. But he doesn’t want to limit shrimp production to just his Story City facility.

He also wants to create possibilities for Iowa farmers elsewhere in the state.

“Our vision is to take something that’s worked quite well for family farms in the poultry and swine space here in Iowa,” said Kimle, an Ames resident who attended Gilbert High School and earned a bachelor's degree in agricultural business from Iowa State.

He wants to give farmers an opportunity to diversify their operations and have long-term contracts to raise shrimp.

“Potentially, it will help bring kids back home to the farm," he said. "We see a lot of opportunity for that, and the Midwestern market for shrimp is a lot bigger than this facility that we’re building here can accommodate."

Accurate Development, the company that was instrumental in the renovation of the former mall, is a main partner with Kimle at Midland Co. Aside from raising shrimp at the Story City location, the site will also serve as a model facility for farmers interested in contracting as growers.

Kimle sources his shrimp from hatcheries in Florida and Texas. They arrive in Story City when they’re about 12 days old and “tiny, tiny,” he said.

Shrimp are fed a pelleted diet and are raised until they’re the proper size. Then they’re sold fresh, never frozen, to restaurants and consumers.

“We’re excited to be able to partner with folks all throughout the state and bring them an opportunity to diversify their operations and hopefully have good returns on that investment,” Kimle said.