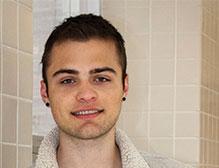 Jack Fischer has several diverse interests. After an earlier change of major, he has enough credits to be listed as a senior at Iowa State, but he’s currently a sophomore with a major in physics, and minors in Russian and economics.

Fischer submitted his paper, “Bank Stress Testing,” to the Midwest Economics Association last year and was notified of its acceptance in the fall. With Peter Orazem, fellow presenter Anthony Sax, and three others, he traveled to Evanston, Illinois to present it at the association meeting.

“I began researching the topic during the spring of 2015 as part of the honors first year mentor program and it turned into a whole paper from there. I ended up submitting it because Dr. Peter Orazem thought that it stood a good chance of being accepted,” said Fischer.

His research looks at how smaller banks, on which public data is available, respond to the types of aggregate economic shocks used in the stress tests currently applied to the largest 150 banks in the U.S.

Despite a fear of public speaking, he was pleased with his presentation during the undergraduate session.  “I’d highly recommend the meeting to other students in the economics department.”