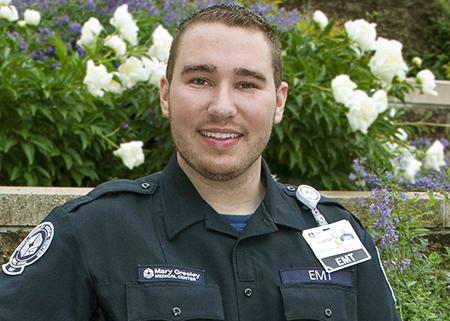 Hunter Crawford was enthralled with listening to his police scanner on his family’s farm in Clarinda, Iowa. He’d received it when he was eight years old from a family friend who was a paramedic.

The senior in agricultural business was drawn to volunteer at Clarinda Regional Health Center at age 16. By 18, he’d earned his EMT certification by taking coursework and passing the exam given by the National Registry of Emergency Medical Technicians. That was the same year he was high school class president, FFA chapter president and head drum major of the marching band.

Fast forward to Crawford’s freshman year at Iowa State. He was soon deeply involved with classes and took on multiple responsibilities in student organizations. In addition to serving on CALS Student Council, being a CALS Ambassador, student member of the ISU Alumni Association board and an executive team member of his Alpha Gamma Rho fraternity, he worked 16 to 20 hours a week as an EMT at Mary Greeley Hospital in Ames. This robust schedule continued until his junior year.

Iowa State closed its doors, as did his fraternity. Because of the virus, Crawford was suddenly working 60 to 80 hours a week at the hospital, doing temperature screenings and working with the ambulance service for COVID patients. Mary Greeley implemented strict protocols and training and provided personal protective equipment.

“For the first month or two, I was pretty worried. We transported some very sick patients,” says Crawford. “After my quarantine, I felt safer since I’d already gone through it and wasn’t too worried about getting it again or spreading it to anyone else.”

Crawford’s internship that summer with Corteva went ahead as planned. After a virtual orientation, he traveled extensively around Iowa with his crop protection team, running training events for farmers, growers and sales representatives.

By fall, Crawford was ready to get back to class. He was comfortable with the virtual format and found the flexibility of online learning an advantage that allowed him to fit in more hours at the hospital.

He worked with his fraternity’s executive team to create and implement a COVID-19 mitigation strategy for the 95 members. In the house, testing requirements, quarantine and contract tracing procedures and temperature scans before lunch and dinner helped keep members healthy throughout the school year.

Crawford’s advisor, Christian Boessen, says, “Hunter has been a pleasure to work with as an advisee. A great student and leader, level headed, mature, and wise beyond his years.”

Crawford’s marathon of service and activities continues this fall. In addition to his existing commitments, he’s also studying for his paramedic license at Des Moines Area Community College. The 12-month course began in August, which means he’s a full-time student at DMACC and Iowa State simultaneously.

After graduation, Crawford hopes to work for Corteva and is committed to continuing his service as a first responder.

“There’s a major demand for good medical providers within rural communities,” Crawford says. “I love living in rural Iowa and no matter where I go or what job I’m in, there’ll always be a need for volunteers and part-time paramedics and EMTs. Being there for someone in need is the most rewarding part of the job.”