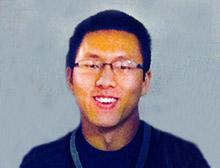 “My family emigrated from Vietnam to the U.S. and settled in Minnesota when I was eight years old. My parents never finished middle school because they couldn’t afford it, so I’m the first in our family to finish high school, let alone college.”

Planning to go to the University of Minnesota, a short 20-minute drive from home, he changed his mind after falling in love with the campus during a visit to Iowa State with friends.

While still a high school senior, Nguyen was invited to join the President’s Leadership Class of Iowa State. He applied and was accepted. Invitations go out to a select number of high school seniors, based on community involvement, grades, and leadership experience.

Once at Iowa State, Nguyen applied to be a Cargill Global Scholar and was accepted. The program awards only ten scholarships per academic year, providing financial support and leadership development to undergrad students from five countries. In his first year of the program, he spent a week in Cargill’s U.S. headquarters in Minnesota, getting to know the company, job shadowing his Cargill mentor, and learning about leadership development. This year, the company is bringing all the cohorts together to one of their international locations in Brazil, India, China or Russia.

Nguyen considered his biggest job on campus was being a community advisor at Richey House in Helser Hall. He managed a house of 60 residents, and sometimes, the entire building of about 700-800 students. Nguyen worked with students to make sure they did well in their first year, adapting to college life, choosing a major, becoming better students, or getting more involved.

In his freshman year, Nguyen read an article about Peter Orazem, his faculty advisor and Econ 301 professor. After learning of his prolific research, he asked if he could do research with him.

“Two weeks later he approached me and asked if I would be interested in doing research on the relationship between taxes and housing prices across state borders. It was an honor, because not that many undergrads get the opportunity to work on research. “

Among his many commitments, the Iowa State junior was president of the Economics Club.

“I loved being involved because of the alumni who are willing to be a part of it. We actually got to sit around a table and just ask them questions. One fall we had Shazia Manus, who I believe is the youngest CEO in Iowa. It’s a great opportunity for students to see what people have gone on to do with an econ major.”

As a club member,  Nguyen traveled to Omaha, where he met Warren Buffet. That spawned another interest he’d been developing: investing. Shortly after meeting the Berkshire Hathaway Chairman and CEO, Nguyen added a finance major to his plate and joined the Investment Group, a student-run fund through the College of Business. The group had about $70,000 in assets under management with hopes of growing that to $100,000 by the end of the year. Their goal was to beat the S&P 500, which they’ve done each year. He quickly became a sector leader, making buy or sell recommendations on stocks and delegating the cash in their portfolio to buy equities.

Nguyen said, “Finance and numbers are fascinating to me but not just numbers—it’s the human aspect of finance that I’m more fascinated about.”