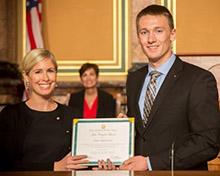 The World Food Prize Foundation has announced Hans Riensche, an Iowa State University student, as the recipient of the 2018 John Chrystal Award at the 2018 World Food Prize Laureate Award Ceremony at the Iowa State Capitol in Des Moines, Iowa. Riensche was honored for his exceptional achievements as a 2017 Borlaug-Ruan International Intern.

Riensche, a sophomore in agricultural business in the College of Agriculture and Life Sciences at Iowa State, was awarded the 2018 John Chrystal Award for his research on locating tiller development genes in rice at the Chinese Academy of Agricultural Sciences (CAAS) in China. He is currently a student at Iowa State University.

“Never had I set out to win the award, I had only desired to make the most out of the amazing opportunity laid before me. To this day I still feel incredibly humbled to have been selected and feel excited that this is only the beginning of a life dedicated to food security," Riensche said.

The John Chrystal Award was established in 2000 in the spirit of John Chrystal's commitment to enriching Iowa's relationship with the world and his belief that everyone is entitled to a sense of dignity and adequate food. The award is presented annually to the Borlaug-Ruan intern who most strongly reflects Chrystal’s commitment.

“The World Food Prize is a truly unique and transformative organization. My time in China as a Borlaug-Ruan intern pushed me to adapt to new cultures, introduced me to an incredible international friend group and inspired me to pursue a life in food security. I have not yet had any other experience which can match the power of setting aside the life I had become comfortable living, moving to the opposite side of the planet and exploring ways that I could make a serious contribution to the search for solutions to the world’s most pressing issues," Riensche said.

The Borlaug-Ruan International Internship was created in 1998 by Dr. Norman Borlaug and John Ruan, Sr. to provide research opportunities to exceptional high school students and to foster the next generation of agricultural scientists. Celebrating its 20th anniversary this year, the Borlaug-Ruan International Internship has sent over 300 students to 34 of the top agricultural research centers around the globe.

Riensche was selected for the Borlaug-Ruan International Internship after participating in the World Food Prize Global Youth Institute, which gathers high school students from around the world to discuss food security and policy with international experts.

The World Food Prize is the foremost international award recognizing the achievements of individuals who have advanced human development by improving the quality, quantity or availability of food in the world. The Prize was founded in 1986 by Dr. Norman E. Borlaug, recipient of the 1970 Nobel Peace Prize. Since then, the World Food Prize has honored 48 outstanding individuals who have made vital contributions throughout the world. The World Food Prize annually hosts the Borlaug Dialogue international symposium and a variety of youth education programs to help further the discussion on cutting-edge global food security issues and inspire the next generation to end hunger.