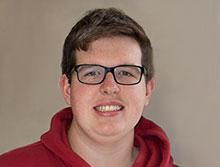 Gerald Healy III grew up in a suburb of Chicago, and graduated from a large high school of 3,600 kids. Because he had a great interest in science and math, he first majored in engineering when he transferred to Iowa State from community college. After a few changes of his major, he soon found that economics was the perfect fit for him.

Healy first met Professor Peter Orazem when he took his Econ 301 Intermediate Microeconomics class. He later took Econ 490 Independent Study each fall with him as well. It was there that he teamed up with fellow student and sports enthusiast Jing Ru Tan to do research on professional sports leagues.

“We both are big sports fans. Originally, we wanted to do the market power of American and European professional sports. In America, the owners decide if they want another team to join, but in Europe, a team can start at the bottom and work their way in through wins.”

They decided to concentrate on American leagues, and add some data on European teams. Every Saturday during the fall 2016 semester, they worked on their research, finding data and running it through business software. They then analyzed reductions, and decided which graphs to include for their paper.

Peter Orazem and PhD student T.J. Rakitan attended the meeting with the students, which also included Melvin Masinde and Jacob Gerlach. Rakitan worked with them the night before their presentations.

“He was extremely helpful, keeping us calm and giving us pointers on presenting before the judges,” said Healy.

Orazem was giving a talk and presenting his own papers, so he didn’t get to see the students’ presentations, and because of some last-minute schedule changes, Rakitan nearly missed them too.

“I felt like I could have done better, but I was presenting in front of economists, so I was very nervous. The judges gave us great pointers. They only gave rankings for the top three papers, but hopefully we were in the top range.”

“The professor from Indiana State wants our paper and so does Professor Deiter (from ISU), because he teaches economics of sports. We’re mostly done with the paper, but this summer we just have to clean it up and add some more data.”

The competition, which started in January, utilizes the Business Policy Game, a challenging international simulation designed to let advanced business students integrate and apply the theories of their business courses. Each week the team had to make business decisions, and then in Anaheim in April, they had to make seven final decisions.

In their initial meetings, the six students had to come up with a simulated company associated with Iowa State. Wanting a basic, relatively low-cost product, they decided on a headphone product called CyPhones. The students also chose the position that corresponded to their chosen future professions; Gerald was VP, Marketing, in charge of advertising. As a group, they figured out pricing.

“We had to make decisions, like if we would give shareholders dividends. Our main goal was to increase market share throughout the competition, which we did succeed in doing.”

In April, the team traveled to Anaheim to present in front of the judges. PhD student Katherine Lacy accompanied the students, giving them advice and support.

“In round four, one of the companies dropped out of the competition because they had a problem with one of their decision sheets, so then there were only four companies in our group and our market share went up to 30 percent, which we were able to maintain throughout the competition. We ended up coming in second place to a team from Shan Tou University in China, which usually destroys all of their competition each year.”

“It definitely was a new experience. It’s a lot better because you learn stuff in the classroom, but here, even though it’s a simulated game, you have to apply it to real life. There were places we could improve, but overall, it was a really nice experience.”