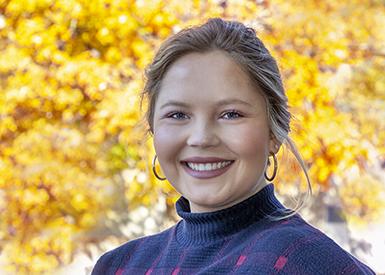 Focusing on the future: Music and agriculture

EllieMae Millenkamp is passionate about ag. The ag business senior grew up working on her family’s large Idaho dairy farm doing a lot of different chores, including helping out with the company veterinarians. She even considered becoming a vet, but decided there was more opportunity on the business side of agriculture.

“I knew I wanted to study something ag related going into college,” says Millenkamp. “I did a lot of research online and decided Iowa State’s Ag Bus program was the best choice for me for what I wanted to get out of my college experience.”

Ag business classes were right up her alley, especially Kevin Kimle’s Econ 334 Entrepreneurship in Agriculture, where she studied the mechanics and the math of setting up a business.

“I took the class last year, and learned a lot from it. At the end of the semester, we had to pitch an ag company before a panel. I thought I’d pitch myself as a business, so I pulled up the numbers and dug in and learned about it. And it went really well, they seemed to like it.”

Millenkamp’s business—and her other passion—is music. She comes from a non-musical family, aside from her grandmother who plays piano. Despite never having had music lessons, she taught herself to play banjo, ukulele, harmonica, guitar, and piano, and writes her own songs, thanks, in part, to a songwriting retreat she attended in Nashville with Judy Stakee.

Millenkamp met fellow Iowa State students Anderson Coates (electric guitar) and Sophia Steenhoek (drums) through the Collegiate Presbyterian Church and The Salt Company. Together they formed her band, EllieMae, and play restaurants, bars, private events, and other venues, they even played a barbershop once.
Customers contact her on her Instagram or Facebook page where she posts pictures and videos promoting the band and upcoming shows. She also reaches out to people who book music.

Her efforts earned her a chance to audition for producers of NBC’s program, The Voice. She progressed from initial interviews and auditions to compete in the show’s blind auditions in Los Angeles from June to August 2019—a kind of summer internship that’s different from most ag business students.

In the hotel with the other show contestants, she befriended and hung out with other talented musicians, learning from them and improving her skills. She also gained valuable technical training from singer Blake Shelton and her other vocal coach who’s worked with some of the biggest names in the music business.

“My mom is supportive and loving of everything I do. My dad is very successful and has always wanted me to be involved in the family business; but since my music has really taken off in the last year, and with The Voice, he’s really coming around to it.”

“I think the biggest takeaway from the show was all the connections that I made. I hope it opens some doors; I really do want to try the whole country music thing after school for a few years and see how it goes. I don’t think I could live in LA, but I can see myself moving to Nashville or Austin.”

“But eventually I’ll want to go back home; there’s something about being on the farm and being with my family. I’m proud of my family, they’ve given me everything I’ve ever wanted. If it weren’t for them, I wouldn’t be where I am. But no matter what happens, I will always have music in my life.”

AMES, Iowa — EllieMae Millenkamp’s senior year at Iowa State University started with singing on national TV and is ending with the unknown of when she’ll sing live again.

Millenkamp, senior in agricultural business from Jerome, Idaho, was on NBC’s “The Voice” last fall. She sang Kacey Musgraves’ “Merry Go Round” during the blind auditions, and judge Blake Shelton turned his chair to give her a standing ovation.

“We’re supposed to hear somebody that we like, and coach ‘em. And I heard enough. I wanted you on my team. Welcome to Team Blake,” Shelton said following Millenkamp’s audition.

Since her time on the show ended, Millenkamp’s music career didn’t slow down – until the COVID-19 pandemic prompted her to cancel all live shows in March and April.

“It doesn’t make me depressed, but it’s sad because it’s so quiet,” she said. “I feed off the energy of going to shows, so not playing shows completely opens up my weekends. I really miss it and I’m excited to get back.”

The music hasn’t stopped entirely. Millenkamp is scheduling shows further out in the year, singing live on social media and writing songs.