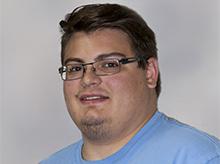 Gaede grew up on an Iowa farm with row crops and some cattle. Like many other small farmers, his dad, as well as his mom, worked off the farm for the main income for the family. Revenue from the farm supplemented their salaries. That seems to be the trend in Iowa according to Gaede.

“I think about 1800 acres is probably the cutoff for someone to go full-time farming. I plan to go back to the farm after graduation, but I’d like to get my own piece, so I can use what I’ve learned here and run it like an ag business.”

During spring semester, Gaede participated on the Iowa State’s team in the International Collegiate Business Strategy Competition. Universities from around the world compete in this 53-year-old event. Each team manages a virtual manufacturing company, making twenty sets of quarterly decisions in competition with four to five other firms run by competitor teams in its simulated world.

The Iowa State team, consisting of six economics students, came up with a headphones manufacturing company called “CyPhones.” Starting in January, the team met each week to analyze data given to them by competition organizers and make decisions for their company.

“I was the VP of Sales, in charge of our forecasting model for the sales side and inventory management, which is what I’d like to do as a profession. Our overall strategy was product differentiation, to see where the demand was for models and features and to switch our models and features to meet the ones in highest demand. Usually we’d meet on Saturday and do our decision in an hour, hour and a half. There was one week when I had to do forecasts and we had to do a strategy plan for the next four years. That was the most intensive part of it.”

As the weeks progressed, the team met multiple times a week to do analysis and make decisions. Finally, in April, the team traveled to Anaheim, California for the on-site part of the competition where teams had to simulate two years of business in one day.

“That was pretty intense. They put all the data in, and gave us the income statement, the balance statement, and the operating info and we did our analysis and forecast and input our decisions.”

“Gerald (Healy) was in charge of marketing and wanted to increase marketing, so we increased it a little bit to keep pace with everybody. For me, I’d say we need a 1,000 units for the next quarter, and we can only produce 800 without overtime, so we’d need overtime in both plants and probably a second shift. The others would say yes we’ll do that, or no, we’ll raise the price to lower demand so we don’t have to spend that much money on manufacturing.”

Other decisions were whether to upgrade their model, build a new plant, hire more sales staff, or increase money spent on R&D, training, or marketing.

“For the most part we all agreed on what to do, everyone came around to the same decisions. It all ran pretty smoothly.”

In document writing and performance, CyPhones came in second place, and the judges said it was really close. And throughout the competition the team was in either first or second in total market shares. This was the first year that Iowa State competed, and Gaede admitted that there was a learning curve to figuring out the actual simulation.

“It was a good experience, like getting a feel for how a business would make decisions quarter to quarter. It was like a real world business experience in a simulated environment.”

Gaede credits instructor Peter Orazem for helping them with the competition.

“He’s a good teacher. I took several econ classes with him; he made it interesting and made me learn a few things.”