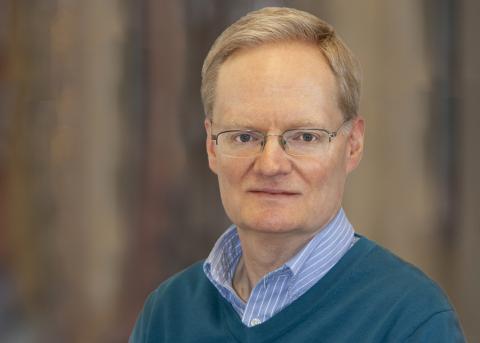 Department alumnus, David C. Wheelock (’82 economics), spoke to members of the Economics Club at a meeting on Wednesday, November 13.

The Group Vice President and Deputy Director of Research of the Federal Reserve Bank, St. Louis, comes from a long line of Iowa Staters, hearkening back as far as 1918, when his great uncle received his ag degree. He went on to work with ISU Extension, as well as run the state 4-H program.

David’s father, Thomas Wheelock, earned his B.S. and Ph.D. (‘58 chemical engineering) from Iowa State and worked on that department’s faculty until his retirement. David’s mother taught for many years in Iowa State’s English department. His sister also received her accounting degree from Iowa State.

After David received his bachelor’s degree in economics in 1982, he went on to get a master’s and Ph.D. in economics from the University of Illinois in 1984 and 1987.

“My first job was as an assistant professor at the University of Texas, teaching at the economics department there.  I was there for four years, before going to St. Louis. I was hired as a visiting scholar at the St. Louis Federal Reserve Bank in 1991. Eventually, (in 1993) they made me an offer that was too good to refuse, and I’ve been there ever since.”

Along with his areas of interest in U.S. monetary history and policy, and performance and regulation of commercial banks, Wheelock has authored many books and articles on the establishment and history of the Federal Reserve Bank and its monetary policy.

“In addition to opportunities for research assistants, you could go on the bank examiner track. Or if your skills are such, we have a lot of opportunities for programmers, web developers, and data analysts of various stripes.”

“Most of our research assistants come with the idea that they are seriously thinking about going to graduate school, but want to get some work experience first. So they’ll come work for us for a couple of years. About a third of them will go on to Ph.D. programs in economics.”

Contagion and Bank Distress in the Great Depression

At the seminar Wheelock gave earlier on Wednesday, he talked about his research paper* that looks at the role of financial contagion during the great depression in the 1930s. It discusses how a banking crisis spreads throughout the banking system via connections the banks have with each other.

“It’s how you can get a crisis that’s in New York affecting a bank in Ames. If the bank in Ames has a deposit in a bank in New York, they might lose that deposit if that bank fails, which, in turn, hurts them. The financial crisis can then spread across the country like a contagious disease that spreads by a sneeze throughout the population.”

The founding of the Federal Reserve in 1914 was intended to prevent these sorts of crises from happening.

“But then in the 1930s, low and behold, we had the crisis, and the Fed didn’t do its job; and, arguably, the crisis was worsened because the banks weren’t as prudent in their risk management as they were in the old days, when there was no Fed. And then we had manifestations of that during the financial crisis of 2008 and ‘09, as well.”

“It’s kind of a compounding problem where banks become less cautious, because they think the Fed is there; it’s going to be a backstop and protect us from these sorts of crises, so they let their guard down. It’s made it all the more important for the Fed do what was promised in the beginning.”