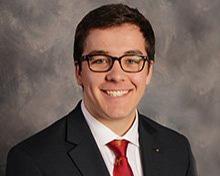 Ag Bus senior Brandon Hanson has been named a recipient of the 2019 Wallace E. Barron All-University Senior Award by the ISU Alumni Association. The Iowa Falls native is majoring in agricultural business, economics and international agriculture.

Hanson is one of Iowa State University’s top scholars in agricultural business—one who has received multiple scholarships for his academic studies, been nationally recognized for academic success at the highest levels, and whose commitment to excellence extends far beyond the classroom.

He is vice president of activities for Alpha Gamma Rho Fraternity, where he has a long history of service–including roles as national constitution and statutes committee co-chair and vice president of finance. He has also served Interfraternity Council as its vice president. He has been active with ISU Freshman Council, Alpha Zeta Honor Society, Ag Business Club, and College of Agriculture and Life Sciences (CALS) Student Council. As a CALS Ambassador, he has given more than 200 hours to student recruitment efforts. As a volunteer with the ISU4U Promise partnership, he has worked to develop agricultural programs for kindergartners at Des Moines’ King and Moulton elementary schools.

Hanson’s passion for agriculture shines off-campus as well. An American FFA Degree holder from the National FFA Organization, he is a past state vice president of the Iowa FFA Association and in 2017-2018 facilitated various two-day leadership conferences for National FFA across the U.S. As president of the Iowa Falls-Alden Agricultural Booster Club, he advocated for the development of a community animal handling facility. While interning at Flint Hills Resources, he led a team that innovated a new method for corn oil evaporator cleaning in ethanol plants and was crowned the winner of Koch Industries’ Intern Innovation Challenge, which included the opportunity to present his team’s idea directly to Charles Koch.

Hanson is a member of the ISU Alumni Association’s Future Alumni Network.