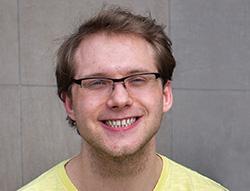 When he first came to Iowa State, Benjamin Meier says he “spent a significant amount of time bouncing around between engineering, economics, math, and Spanish, changing my major four times before the end of my sophomore year.”

He wanted a degree that incorporated economics, operations, and systems engineering with a heavy emphasis in mathematics. Then he spoke with Professor Terry Alexander, who helped him finally settle on the perfect combination of these majors: industrial engineering and applied math in economics.

One of Meier‘s favorite courses was Econ 344. “It’s a public policy course taught by Dr. Elizabeth Hoffman. It includes in-depth analysis of current public policy issues in the U.S. with a touch of debate and game theory.”

Meier also had the opportunity to do research with Dr. Peter Orazem, who became his favorite instructor. Peter “works hard every minute of the day to encourage learning, research, and student success.”

It was Orazem who encouraged Meier to submit his draft to the undergrad research conference, where it was accepted. He finished his paper “Minimum wages and youth job training: implications for earnings and career skills as an adult” and presented it at the conference. The paper investigates how differences in minimum wages across states during the high school years affect skill acquisition on the job. Meier learned a great deal about creating a presentation when he attended the Midwest Economics Association meeting in Minneapolis last spring to present a paper by Zachary Deitrich, who was unable to attend.

During his time at ISU, Meier was busy. He belonged to three honor societies: Phi Beta Kappa (LAS), Tau Beta Pi (Engineering), and Omicron Delta Epsilon (Economics). He was awarded highest two percent in engineering and LAS in Spring 2013, all while working as a community adviser for two years in Friley and Legacy and being involved in Inter-Residence Hall Association for Friley Hall, Institute for Industrial Engineers, and Economics Club. Meier has a clear goal for his future career:  He wants to work in an organization which evaluates and contributes to the improvement of public policy through quantitative analysis.

In June 2016, Meier accepted the position of business operations analyst at the Dallas Federal Reserve in Houston.