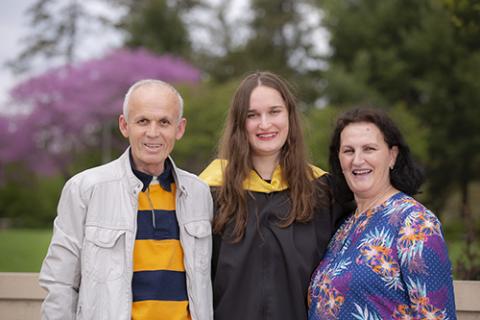 The semester before graduating from Iowa State University, with master’s degrees in economics and sustainable agriculture, Albulena Basha reviewed the Graduate College’s deadlines. After some internal debate, she decided to defend her thesis on April 1.

That date hadn’t always brought positive memories for Basha: On April 1, 1999, she and her family were forcefully removed from their home in Kosovo by the Serbian paramilitary.

“I thought, do I really want to associate my defense with something that bad?” Basha said. “For some time, I thought maybe I shouldn’t do it, but then eventually I thought maybe it’s good to do it, because now I have something nice to remember that day by.”

Basha was five years old when war started between the Kosovo Liberation Army and Serbia. From early 1998 until NATO’s intervention in mid-1999, Serbian forces engaged in a program of ethnic cleansing, causing thousands of civilian deaths and displacements.

“My parents did a really good job of shielding me from what was going on. There was a lot of bombing from NATO and I was under the impression that it was just thunder,” Basha said. “But then we’d sleep on the floor, so if the Serbian paramilitary decides to just start shooting at windows, we’re not being hit or anything.”

In early 1999, Basha was living with her parents, older brother and several extended family members. Although they had been given the option of leaving their home, they initially elected to stay because they had no other place to go. However, on April 1, the paramilitary removed her family from their home at gunpoint.

“They told my mom that she only had 10 minutes to leave. My mom asked, ‘Can I have 15 minutes because I have kids?’ They told her in that case, she only had 10 minutes, but also had to let everyone in the building know they have to leave. So not only did they not give her 15 minutes, they made her get all the other families in the building out,” Basha said. “We left, we went outside the apartment building, and we were just surrounded by paramilitary. They had guns and they’d make us walk in particular ways, and if someone moved just a little bit, they’d kick them. We were just following the crowds, and we were headed to the train stations pretty close to our apartment building.”

After spending two nights sleeping outside and waiting to leave, Basha’s family was able to get on a train to Macedonia.

“People were telling my parents that they were taking us to a factory, and my parents were worried that they were just going to take people and burn them alive, because that had happened in other parts of Kosovo,” Basha said. “But we ended up living in refugee camps [in Macedonia] for a little.” They were later hosted another family for a few months. 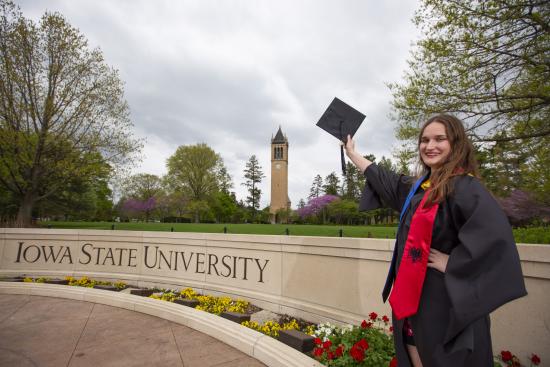 Although Macedonia was calmer and quieter, Basha remembers being unsure why her family had been forced out of Kosovo, and whether they would ever be able to go back. But two months after NATO intervened in the war, armed forces withdrew from Kosovo, and her family learned it was safe to return home.

“We came back to an apartment that was completely turned upside down. Everything was broken and just destroyed,” Basha said. “Outside the apartment, rubble was everywhere. It took a while to renovate and make them new again, but it just feels weird because your whole world is shattered, and you don’t know what’s going on.”

Despite this, Basha didn’t find readjusting as difficult as she initially expected. She had worried that life would go back to the way it was during the war and that she would have to leave her home again, but that didn’t happen. She was also excited to go to school, something she had not been able to do during the war as the schools not taught in the Serbian language were closed.

Basha’s excitement for school continued as she grew up. She attended the Rochester Institute of Technology in Kosovo for her undergraduate studies, majoring in economics and management. After she earned her degree, she worked at the Ministry of Finance and German International Cooperation. She also taught TOEFL classes privately and through a USAID-funded training program. During this time, she decided to go to graduate school so she could eventually teach more classes and help Kosovo develop.

Basha heard about Iowa State through Curtis Youngs, a professor of animal science at Iowa State, who was teaching a summer course in Kosovo. She decided the university would suit her interests in agriculture and economics, and she was one of six Kosovars granted a fellowship through the Kosovo American Education Fund.

“I told my parents, and my mom started crying about my going so far away,” she said. “But they were very proud and supportive, but also emotional.”

As a graduate student at Iowa State, Basha has examined farmland value in the Midwest.

“Recently, the Federal Reserve has announced that they want to increase the interest rates because they think the U.S. is completely out of the recession now, and it doesn’t make sense to have the interest rates as low as they have been in the past decade,” she said. “Obviously interest rates affect a lot of the assets that you generate income from, and I just wanted to build a model that could predict what would happen [to farmland values] if interest rates keep increasing.”

Basha worked with her major professor, assistant economics professor Wendong Zhang, to develop this model. Their findings project a decrease in farmland values over time.

“We divided [the model] into three different regions, and it’s a decrease across the three regions, but it differs from region to region, some in larger magnitude than others because there are important agricultural states, like Iowa,” Basha said.

The model she and Zhang developed served as a central part of Basha’s master's thesis. As she neared her project’s completion, she explained to her program of study committee why she wanted to defend her thesis on April 1.

“My committee was very understanding, and they worked around some of their schedules to make April 1 happen because it was such an important day, and for that I’m very thankful,” Basha said.

After she successfully defended, she was emotional, but also proud and happy to have a better memory of April 1.

“I am where I am because you can’t change the past. You don’t make those decisions in your life to be put in that situation,” she said. “What happened to me 20 years ago was not my choice, but what happened to me this year was my choice. It just makes you feel like you gain some control back and you choose how to think of this date, and now not necessarily every April 1 I’m going to be sad. I can just think, I made it.”

Basha graduated from Iowa State after earning two master’s degrees in just two years and receiving the Graduate College’s Teaching Excellence Award. Her parents, Mumin and Afërdita, traveled to the United States from Kosovo to see her walk in commencement; it was her father’s first time visiting the country.

“In my two years here, everything that I’ve done, every project that I did and every little thing that I finished, I was here by myself,” Basha said. “So now to have them here and share this major accomplishment, everything’s coming together, and having someone from home to share it with is very exciting.”

She will work in Kosovo for the next two years, as is required under the terms of her J-1 U.S. visa, but after that, she plans to return to Iowa State to get her doctorate.

“I like Ames and I like the people here. People would say hello to me even though they didn’t know me. When I first moved here, a lot of people were helping with things. I’d go to Goodwill to buy something for my room, a desk or something, and people would offer to give me a ride,” Basha said. “I’ve been here for two years, and I’ve just grown to love this place so much. It’s my second home. And it’s not that everywhere I go, I fall in love with everything, but I just think Iowa is something special.”

Ultimately, though, Basha wants to live in Kosovo and use her expertise to help build the country.

“I don’t think the U.S. necessarily needs me; I think my country needs me more. I want to come here and learn from the best, and then go back [to Kosovo] and teach future generations,” she said. “Having been a kid when the war started, and having seen firsthand how hard people fought to have a country, not many people can say they lived to see their country develop. I want to be part of that process."