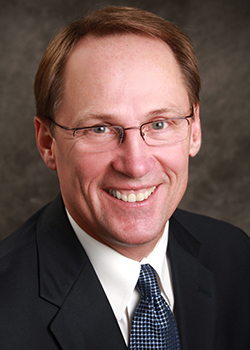 Jeff Plagge ('78 ag bus), president & chief executive officer of Northwest Financial Corp (NFC), was appointed by Gov. Reynolds to serve as superintendent of the Iowa Division of Banking. Plagge begins his new role when Ron Hansen steps down on Sept. 16, 2019.

“Jeff is a proven leader with deep insights into the banking industry, especially when it comes to balancing consumer protection with regulatory oversight,” said Gov. Kim Reynolds. “He believes in building trust, exchanging ideas, and staying on the forefront of industry changes. Jeff will do an outstanding job in his new position.”

Ron Hansen has served as superintendent of banking since November 2015.

“Ron has been a dedicated public servant who is a valued member of my Administration.  In the months ahead, he will play a significant role as we transition to a new superintendent,” Gov. Reynolds continued. “We’ve been fortunate to have him at the helm for so many years. I wish him all the best as he returns to the private sector this fall.”

“It has been a privilege to serve as superintendent of the Iowa Division of Banking,” said Ron Hansen. “I appreciate the opportunity provided by former Gov. Branstad and Gov. Reynolds and am proud to have worked with them as well as the talented and dedicated employees of the division.”

Jeff has served as the chairman of the Iowa Bankers Association and the American Bankers Association, as a board member of the Federal Reserve Bank of Chicago, as the chairman of the Community Depository Institution Advisory Council for the Chicago Federal Reserve and as a member of the same Council for the Board of Governors. Jeff graduated from Iowa State University with a bachelor's degree in Agricultural Business and a minor in Advertising and Public Relations. He also completed the Colorado Graduate School of Banking program.

Plagge’s appointment is subject to confirmation by the Iowa Senate.