A page from pro sports: Ag Bus Club and a Kenyan soccer team 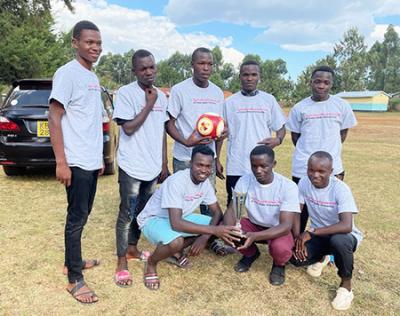 Just as the losing Super Bowl teams gift their "championship" merchandise after the big game, Iowa State's Agricultural Business Club donated their T-shirts to a soccer team nearly halfway around the world.

The team is the Rising Star Football Club, a local soccer team in the village of Maliki, Kenya, an agricultural community with limited resources. There are also few sources of income-generating activities there for young people who’ve graduated from high school and aren’t able to pursue advanced education.

To keep them busy, engaged in education and other positive activities, the community taps young men for the soccer team, which has won or been a runner-up in several tournaments. The team practices in the fields of Rising Star Elementary School, the alma mater of most of the players.

The team is not just about football. For members, it's an avenue for economic self-reliance — leasing of sugarcane fields to generate income is one of their newest ventures. When they aren’t practicing soccer or preparing for a tournament, they’re busy working in the fields or trying their hand at other entrepreneurial activities. 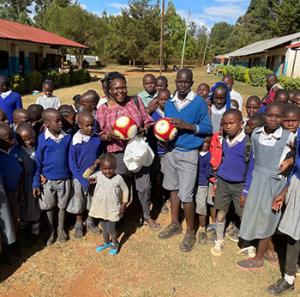 The Ag Business Club connection with this Kenyan village started back in 2016, when some alumni of the Ag Bus program and club traveled to Maliki with Ebby Luvaga, teaching professor, and donated books to the village library. When she visited Kenya in December 2021, Dr. Luvaga delivered the club T-shirts to the Rising Star team.

The books and T-shirts to the library and the team were the first donations by the club. But as the Ag Business Club looks to the future, they've set a new goal of engaging in global outreach opportunities and plan to sponsor more of the team's activities and engage with the village in the future.

In photo at right: Ebby Luvaga donates soccer balls to the students of Rising Star Elementary School in Maliki, Kenya.