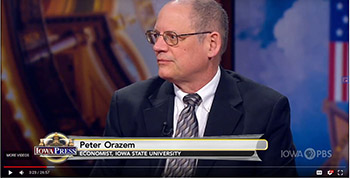 "We're coming into this problem running rather substantial deficits when we should really not have been running stimulative economic policies given the standpoint of the overall economy."

This story also covered in:

"The economy has not really lost much yet," Iowa State University economist Peter Orazem said in an email. "We are only a few days into the retail and eating/drinking shutdowns. In a month, we will have some idea of how bad it will get."

He was also interviewed for the article, "Economists see real pain, but recovery in Iowa starting before end of 2020," in the March 20 The Neighbor.

The COVID-19 pandemic will cause short-term pain for the Iowa economy — more in some sectors than others — followed by recovery beginning later this year, a pair of economists predicted Friday.

Last month, he noted, the economy added a substantial number of jobs and unemployment was historically low.

“That will change, but the only question is how long is it going to be before we can gain our economic momentum,” Orazem said.

This story also covered in:
The Courier, March 21