Iowa’s 2016 current gubernatorial race is starting to heat up. Democratic challengers, as are all politicians, citing "job creation" as a major platform focus of their political campaign. In his 2010 campaign, Terry Branstad set a "job creation" goal for his 5th term as Iowa's governor at 200,000 new jobs. The Governor now claims to have created 130,000 Iowa jobs to date. How many "new" jobs has the Governor actually created and how many "net" jobs have been created in Iowa since January 2011?

Governors really do not create jobs. Their departments of economic development, as well as other departments, may provide assistance, subsidies, and other types of aid to industries, but they do not create the jobs. The industries create the jobs. And the industries create the jobs in response to some type of demand that exists within the economy for the products that are produced or distributed. Furthermore, the vast majority of job gains (or losses) in an economy have absolutely nothing to do with government policy at all: they are simply normal responses to business cycles or to natural population growth. So, a better way to ask the question is how many jobs were created by industry (by the way, government is an industry) during this governor's tenure? The honest answer, using U.S. Bureau of Labor Force statistics, is that through the month of December, 2013, the state of Iowa has added 52,600 payroll jobs to the economy since January, 2011, when this governor took office. This the net number that you asked about.

You may hear representatives of the Governor's office of in economic development talk about gross job creation; that is, they are counting only jobs that are created and not discounting jobs that have been lost. That is a completely non-standard manner in which to tally job change over time, and is not used by any credible government agency in the measurement of overall economic performance. It is analogous to measuring population change over time by only counting births but ignoring the deaths, which we all agree would be silly. Using that decidedly non-standard measure, advocates of that method of measurement will claim that Iowa has added 137,500 jobs through the end of 2013. Accordingly, the difference between 137,500 and 52,600 represents the magnitude of distortion that occurs when job creation is politicized rather than tallied in a dispassionate and professional manner, as would be the case with academics or with national agencies tasked with tracking economic change. The accompanying graph shows the distortion. 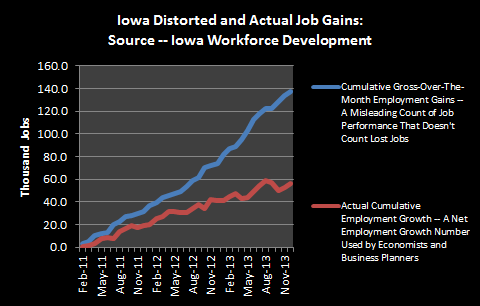 Finally, and this is important, this governor took office during the early stages of Iowa's recovery from the Great Recession -- we had begun to expand again around a year earlier. Since beginning its recovery, however, Iowa has lagged the nation's performance. Between January, 2011, and December, 2013, Iowa's total non-farm jobs increased by 3.6 percent. Over that same time period, the U.S. growth total was 4.9 percent.