I came across a company recently which farms mussels off the coast of a small town in Bulgaria, and I started thinking about its structure in the economy. I know since it produces a homogenous product along with hundreds of other mussel farmers, it must be in perfect competition; however this mussel company also sold locally on top of selling to suppliers. This means it was the only mussel supplier (locally) in the town, and as far as I know that's a monopoly. My question is, what would this company's graphs look like? Would it be more like a perfect competition, or a monopoly? Although it is the only supplier in the town, it sells the mussels at the same price if not cheaper to locals as it does to suppliers, which I know unlike monopolies. Would there be any deadweight loss in a company like this? Is it inefficient or is it more efficient than normal? Consumers can buy mussels from the supermarket, but local supermarkets all get their supply of mussels from this one local company. Please help me understand!

The local mussel farm has a cost advantage in supplying in its own town mostly because it saves on transportation costs. Even with that cost advantage, the local firm may not be able to fully exert monopoly power on the local market. It is easy to imagine that farms in nearby villages could compete on the local market. The existence of that potential competition will limit the market power of the local farm depending on the cost of producing mussels locally, transportation cost and the price of mussels coming from outside of the village. There are two cases to consider.

The first case is when the local farm is constrained by outside competition. Figure 1 illustrates. Let’s begin by considering the situation where the local farm does not sell in town and that all mussels are imported from outside. In such a case, the price is given by the conditions prevailing in the total mussel market and the cost of transportation to the local market. Consumers then buy a quantity of mussel equal to Q* at a price P*. If the local farm decides to sell on the local market, it cannot sell at a price above P* if we assume that mussels are a homogenous product. This means that outside competition has the potential to constrain the ability of the local farm to charge its monopoly price.

Overall, the local monopoly benefits consumers because it has lower cost and its market power is limited by outside competition. If we assume a counterfactual where the village is supplied by mussels coming from outside at a price P*, a monopoly by the local farm does not hurt consumers, causes a net improvement in welfare such that there is no deadweight loss. 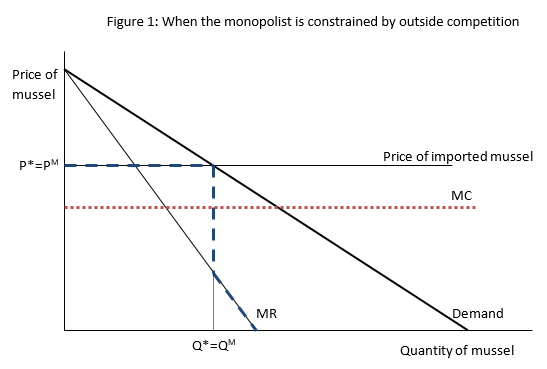 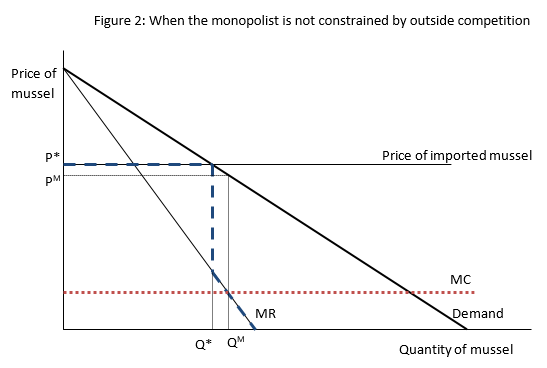