How does it affect the economy to have more people pursue careers in minimum wage jobs?

Hello, I'm a 42 year old woman from Los Angeles CA. Due to personal reasons I left the state for about 10 years. Now that I'm back, I noticed that things have changed a lot! For example: when I was a young adult, I used to work as a waitress. I remember that most of my co-workers were about the same age and most of us were attending Junior College. However, now I'm 42 years old, I noticed a completely new group of people. Most are mature, in their mid 30s to mid 40s. A lot of them made careers out of working as servers. How does it affect the economy to have more people pursue careers in minimum wage jobs?

The probability of being paid the minimum wage falls rapidly as individuals get older. Teenagers are most commonly paid the minimum wage, both because they are more likely to be paid on an hourly basis and because they are not highly skilled. As shown in Table 2, 17% of workers aged 16-19 are paid at or below the minimum. By the time the worker reaches 30 years of age, less than 2% fall in the minimum wage group. The percentage remains extremely low until workers reach 70 when the fraction paid on an hourly basis begins to rise again.

As you live in California, the likelihood of landing in the minimum wage group are even lower. California has the 9th highest average income in the country and prevailing wages are higher than the national average. Moreover, California has set a minimum wage above the federal level, standing at $9 per hour.

The most recent information we have for pay in the restaurant industry in Los Angeles is from 2010. Mean pay for tipped workers was $8.43 not including the tips. Restaurant workers can legally be paid less than the minimum wage if they are employed in a tipped establishment. However, the employer has to certify that the workers are paid at least the minimum wage when tips are added in. 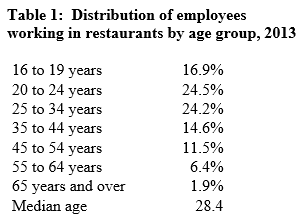 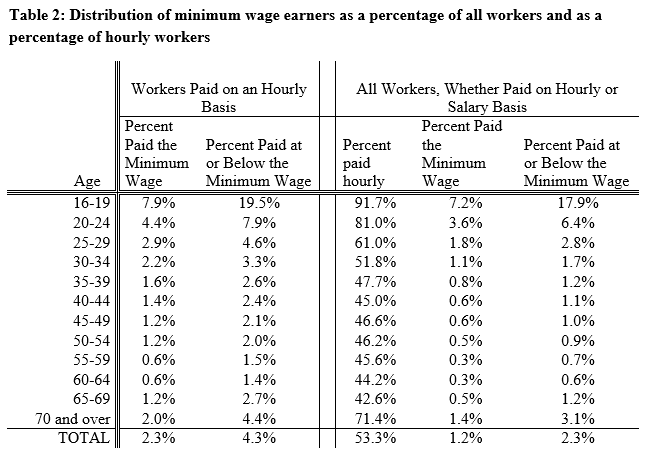