What if all 50 states adopt Right to Work?

I would like to get your educated opinion on Right to Work, specifically, what will happen if all 50 states in our country become RTW states.

Right now, it is attractive for a corporation to set up or move their business to a RTW state due to lower wages and not having to deal with strong unions. I understand this. But how will a RTW state entice a company to move FROM a RTW state?

Cut corporate taxes? Suppress wages? Reduce services to the tax payers so more money can be given to the corporation? How will states entice business to set up shop once this is a Right to Work country? Thanks for your time.

Your question requires that I explain some of the background for Right-to-Work laws, and I took the liberty of adding a more general answer on the effect of Right-to-Work on the economic outcomes for firms and workers.

Union strength in the United States reached its peak in the mid-1950s and has been on a long steady decline ever since. As shown in Figure 1, the declining union share of the labor market appears both in the share of nonfarm workers who are union members and the share who are covered by a union contract. The decline is even more pronounced if we only look at private sector workers who are union members which is now below 7%. The main source of growth for unions has been in the state and local government sector following President Kennedy’s 1962 Presidential Executive Order that legalized federal unions. Thereafter, state governments rapidly followed suit in legalizing public sector unions, and the membership growth was dramatic. In 2009, the number of public sector union members exceeded the number in the private sector for the first time.

Right-to-Work (RTW) laws were made possible by the Taft Hartley Act if 1947. In states with RTW laws, it is illegal to require that workers join a union as a condition of employment. In states without RTW laws, union shops are allowed. Union shops require that workers must join a union within a specified period of being hired by the firm. Because they insure that all workers will pay dues and will be covered by union rules regarding complying with work stoppages, union shops will lower the costs of union organizing and will improve the union’s effectiveness in bargaining for better compensation and working conditions.

Within a few years of the passage of the Taft Hartley Act, 22 states passed RTW laws. As shown in Figure 2, most of these states were in the south, the Midwest, and the mountain states. All of these states had relatively weak union movements even before the Taft Hartley Act came into effect. In the last three years, RTW laws were passed in Indiana, Michigan and Wisconsin.

RTW laws have been blamed for weakening union organization efforts, and it is undoubtedly true that union density (the ratio of union members to workers) is lower in RTW states. In 2014, union density in RTW states was 7.6 percentage points lower than in states without these laws. Union density fell 14 percentage points more since 1963 in RTW states than non-RTW states. But these correlations do not imply causation. A famous paper by Lumsden and Petersen (1975) untangled the correlation versus causation issue by comparing the effect of being a RTW state before the Taft Hartley Act was passed to after the Taft Hartley Act was passed. Obviously, RTW status could not have altered union density in years prior to the passage of an RTW law. However, Lumsden and Petersen found that the RTW effect was the same before and after the passage of Taft Hartley. That implies that the states that passed RTW already had low levels of union membership before the law was passed, and RTW had no added effect on union membership.

But unions have lost strength in union shop states also. Membership in these states has fallen 54%, even though unions in these states should have an advantage in recruiting new members and maintaining union strength. The consensus from the economics research is that RTW laws do not affect union density and that their importance is more symbolic than substantial (Moore and Newman, 1985). 1

RTW states have grown faster than union shop states, but that also is clouded by conditions that existed before the Taft Hartley Act. Economies that are still developing grow faster than economies that are fully formed, and the strong union states were fully industrialized before the Taft Hartley Act was passed. However, the U.S. population was still shifting west and south after World War II and these state economies had more scope for productivity growth.

Wages are lower in RTW states, but that also is because the South and Midwest have lower wages on average, conditions that existed before the Taft Hartley Act was passed.

Nevertheless, the study by Holmes (1998) showed that RTW states did have advantages in fostering manufacturing growth compared to union shop states. He examined employment growth of manufacturing firms at state borders where one side of the border was governed by RTW and the other by union shop rules. The key identifying feature of this strategy is that the geographic comparative advantage should be the same on either side of the state border, and so the estimated RTW effect should not be confounded with other productive attributes. Holmes found that there were large and statistically significant employment growth advantages on the RTW side of the border, but the effect shrank quickly as distance from the border increased beyond 25 miles. Effectively, Holmes results suggests that border counties of RTW states grow faster if their neighboring county across the border is in a union shop state, but counties further into the interior of the state do not benefit from their RTW status.

To the issue of what happens when the two adjacent states are both RTW states, the answer is there is no advantage. Similarly, if both states were union shop states, there would be no advantage. More generally, there are many reasons why firms locate where they do, and RTW status is unlikely to dominate access to critical inputs, proximity to customers, transportation, tax structure, or any number of other factors. While there is some evidence the RTW matters at state borders, its overall importance is small compared to those other reasons to locate.

[1] Ellwood and Fine (1987) found that RTW laws affect organization efforts at first, but the effect dissipates over time. 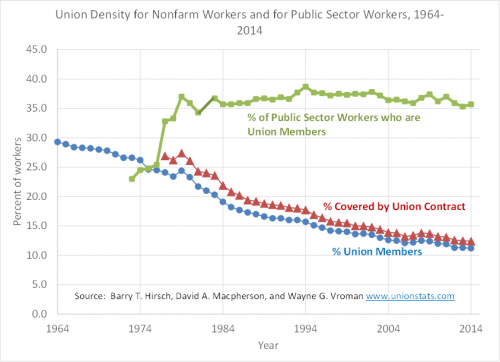 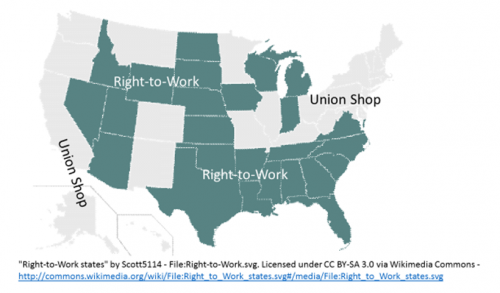