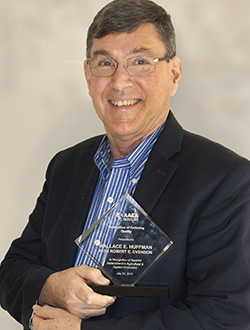 Wallace Huffman, professor, has been awarded the prestigious Publication of Enduring Quality award by the Agricultural & Applied Economics Association for his co-written book with Dr. Robert E. Evanson, entitled Science for Agriculture: A Long-Term Perspective.

The Iowa FFA Farm Business Management Career Development Event (CDE) was held on the ISU campus on April 11th. There were 298 individuals and 83 teams participating in the competitive contest.

Agricultural business senior Trey Forsyth will be the senior speaker at the CALS graduating senior convocation on May 6, 2017.

Ronald Deiter, professor, was invited to give a presentation before the Alpha Zeta Honorary on the Iowa State campus. He spoke on "Welcome to the Real World (i.e., Life After College)."

Members of the department, students, and friends gathered to recognize and celebrate Dr. John Schroeter's retirement at Heady Hall. 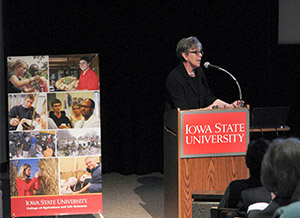 The Center for Agricultural and Rural Development (CARD) hosted the College of Agriculture and Life Sciences Sustainability Symposium on Thursday, April 13. 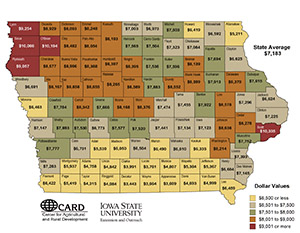 David Swenson, associate scientist, was interviewed by Matthew Patane, The Gazette, for a story on the drop in Iowa's February unemployment rate.

Peter Orazem, university professor, was interviewed by Erin Jordan, The Gazette, about grants to the Economics department from the Koch Foundation.

Chen takes position with the University of Georgia 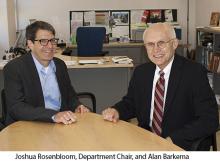 An open letter was released April 12, 2017, signed by 1,470 economists, affirming that immigration is good for the American economy. Signatories include six Nobel Laureates and members of the Reagan, GHW Bush, Clinton, GW Bush, and Obama Administrations, as well as leading economists from across the country. Several economists from Iowa State University also participated.

What will replace Blackboard?

ISU’s Blackboard license will expire at the end of the year. It will be replaced by Canvas or Desire2Learn. A final decision will be made next month. This is a critically important matter for many faculty, including some in the department.

Jacobs has cover article in AgriMarketing

Keri Jacobs, assistant professor, was asked to submit an article on consolidation of ag cooperatives for publication in AgriMarketing.

Neil E. Harl, emeritus professor, was invited to address the Committee on Agriculture, United States House of Representatives, on Taxation and Tax Policy, on April 5, rescheduled after a March 15 cancellation. Because of  Mrs. Harl's illness, Dr. Harl submitted his views in writing.