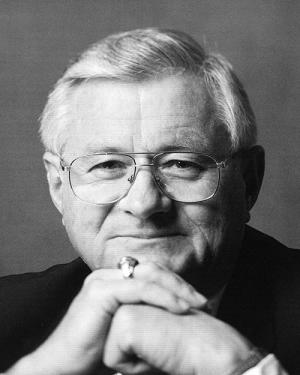 He became a member of the Iowa State University faculty on December 1, 1964, as an Associate Professor of Economics. He was promoted to Professor on July 1, 1967, and became a Distinguished Professor in 1976.

During his years on the ISU faculty, Harl’s appointment was divided among teaching, research and extension, with approximately one-half time devoted to teaching.  He primarily taught two courses at the undergraduate level–agriculture law and resource economics—and three courses at the graduate level–advanced resource economics, water resources, and antitrust and trade regulation. He was known as an excellent, innovative and effective instructor at both the undergraduate and graduate levels, and he was the recipient of numerous teaching awards. Here are three awards for teaching that he received: Outstanding Teacher Award, Iowa State University, 1973; Distinguished Undergraduate Teaching Award, American Agricultural Economics Association, 1976; Outstanding Educator, Mortar Board, 1989.

Neil Harl is widely known and respected for his prodigious output of scholarly publications. He was the author or co-author of more than 300 scholarly articles and professional bulletins. And he produced a 15-volume treatise, Agriculture Law, which he updated twice annually for years. This work came to define the subdiscipline of agricultural law. It was used widely by attorneys and legal scholars throughout the US.

Neil Harl worked diligently to increase the legal and economic knowledge base of attorneys, CPAs, lenders, those in business, farmers, and families throughout the United States, as well as in Iowa. For example, in 1974, he inaugurated two Farm Income Tax Schools for practitioners in Iowa. The two-day schools were expanded to eight at various locations in Iowa and reached 1200 to 1400 attorneys, CPAs and other tax practitioners each year. Here are four (of many) awards that Harl received for his extension work: Faculty Service Award, National University Extension Association, 1980; Distinguished Service Award, Iowa State University Extension, 1984; Distinguished Service to Iowa Agriculture, Iowa Chapter of the American Society of Farm Managers and Rural Appraisers, 1996; Charles A. Black Award for “ability to disseminate research findings to the public,” Council for Agricultural Science and Technology, 1997.

Neil was preceded in death by his wife, Darlene. He is survived by his two sons, James and Rodney, and five grandchildren.