Leist honored to serve on Board of Regents 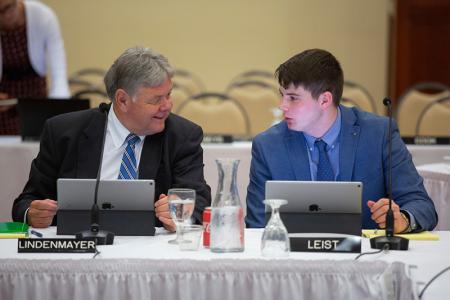 Junior Zack Leist feels honored to serve as a student regent for the Iowa Board of Regents. He is filling the unexpired term of former University of Northern Iowa student Rachael Johnson, who served four years and resigned last March.

Leist, who had plenty on his college plate prior to Gov. Kim Reynold's invitation last spring to fill the student vacancy on the nine-member board, said he's grateful for opportunities like this one.

Leist's plan is to triple major in agricultural business, economics and international agriculture and try to pick up a minor in agronomy, as well. MBA and law degrees are possibilities when he finishes at Iowa State in May 2021, about the same time his regent term expires

"I like helping people, and this is that -- on a large, large scale," he said.

While one could argue he represents the 75,128 students at Iowa's three public universities, he sees it as serving 3.1 million Iowans.

"I know I come with a student perspective, but I have to look at what's good for the state, for the people of Iowa -- and that conflicts with what students expect sometimes," he noted.

Case in point: At Leist's first meeting in June, the regents approved tuition increases that were higher than hoped for but adhered to the board's guidelines based on state appropriations for the year. He actually was absent the day of the vote, but his Alpha Gamma Rho fraternity brothers gave him a hard time about the price hike.

Every generation deals with its own challenges and problems, he explained. He believes his experiences and perspective on issues such as technology, diversity and mental health will be useful to board discussions. Leist serves as vice chair of the board's campus and student affairs committee.

The Clarion native also sees board membership as "an opportunity to show that kids from small towns can do amazing things."

The board of regents first added a student regent to its membership in 1985. Leist is the 11th student regent and the fifth undergraduate from Iowa State.