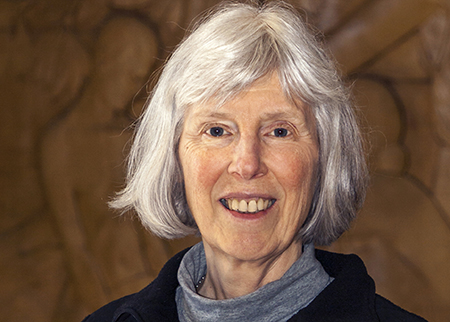 After more than 33 years of service, Helen Jensen, professor of economics, is retiring from Iowa State University. “I am ready to shift gears,” Jensen said. “I have had the opportunity to have a career that started with 80 column computer punch cards and now is carried out on hand-held devices. However, today’s economic issues are remarkably similar to those I worked on when I started.”

Jensen came to Iowa State in 1985, and began her affiliation with the Center for Agricultural and Rural Development (CARD) in 1986. “My affiliation with CARD came relatively early in my time at Iowa State,” Jensen said. “Stan Johnson became the new director of CARD in 1986. He was looking for someone to help with several initiatives on agricultural and food economics issues.”

Jensen’s knowledge and understanding of food economic issues proved her a good fit at CARD—she was named head of the Food and Nutrition Policy Division in 1986. Through the years, Jensen’s research at CARD garnered her several awards and accolades, including the Board of Regents Faculty Excellence Award, the Dean Lee R. Kolmer Award for Excellence in Applied Research, and being named Fellow of the Agricultural and Applied Economics Association.

More important, her research received national and international attention, which prompted her inclusion in many high-profile panels and committees, including five with the National Research Council’s Board on Agriculture and Natural Resources and six with the Institute of Medicine at the National Academy of Nutrition Science (NANS). The NANS committees were charged with evaluating the major U.S. food assistance programs for Women, Infants and Children (WIC), school meals, and the Child and Adult Care Food Program.

“If I look back at what really made a difference, it was that WIC report. Within 18 months, new regulations had been introduced and passed that moved it away from a dairy, cheese, and eggs program to having a variety of foods designed to meet the dietary needs of women and children. It was working with the nutrition community, looking at behavioral aspects of the program to enhance participation, as well as costs and the products available in the food system that would meet the requirements.”

Jensen’s career in economics has been distinguished; however, she almost took an entirely different path. “My time in college started with the expectation of following a pre-med major,” she said. “After taking a first course in economics (Principles of Macroeconomics), I got interested in studying social sciences—an area that was new to me, and not part of the traditional high school curriculum.”

While that first college course drove her interest in economics, her interest in social sciences came about partially due to the cultural changes of the late 1960s. “My time as an undergraduate marked a period of renewed interest in civil rights and the beginning of President Johnson’s War on Poverty. My interest in social programs and policies started at that time and has carried through to today,” Jensen said.

With her career winding down, Jensen said she is looking forward to retirement.  “I’m really working on developing new interests. I’ve never really had the opportunity to take my talents to other topics, to get involved in some community actions, possibly management of park land.”

But Jensen will take away fond memories of CARD. “I have worked easily with every director. Each was very different—their priorities, their ability to engage with policy, their enthusiasm--each has been very effective in their own way. The students, staff and faculty have been great colleagues. CARD’s environment continues to provide a dynamic opportunity for research on challenging problems related to food, agriculture, and the environment,” she said. “I’ve been here long enough to have seen a lot of changes. I’m really interested in seeing what happens as new faculty take root.”