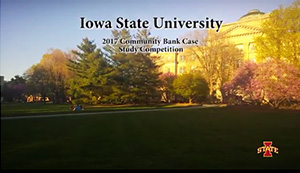 Iowa State's team was awarded second place in the Community Bank Case Study Competition sponsored by the Conference of State Bank Supervisors. Thirty-three teams from universities across the country competed.

Each student team was asked to develop an original case study, including a paper and video, that evaluates and provides recommendations for a bank's leadership succession plan. The names of the top three teams were announced May 25 during a live webcast that was video streamed on the case study competition website.

This was the first year Iowa State has competed in the event. Students on the team include: John Bebel, a May graduate in finance from Eagan, Minnesota; Callen Duffy, an agricultural business junior from Eagan, Minnesota; Timothy Dwyer, a May graduate in engineering from Woodstock, Illinois; James Howell, a senior in economics from Ames; and Mengyu Wang, a senior in aerospace engineering and economics from Ames.

The team will receive a $500 CSBS scholarship per student and also have their work published in the Journal of Community Bank Case Studies.

The students partnered with Ames National Corporation, which is affiliated with several central Iowa banks. Peter Orazem, university professor, and Katherine Lacy, a graduate assistant in economics, served as the team’s faculty advisers.

Orazem told the team, "Congratulations, it was an honor to have served as adviser."