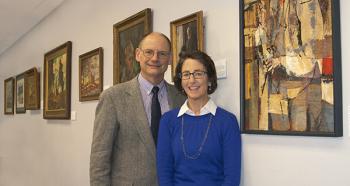 The formerly bare walls of the seminar room 368A Heady Hall are now home to 14 art pieces belonging to Peter Orazem, university professor, and his wife, Patti Cotter.

Orazem credits his mother for igniting his love of art when he was a boy. On their visits to museums, he fantasized about owning original paintings of his own one day.

Later, traveling the world as a consultant for the World Bank, he began buying a piece of art from each country as a souvenir. He and his wife began populating the walls of their Ames home with that collection of paintings, drawings and lithographs, gradually adding paintings of the rolling hills of Iowa from local artists Keith VanDePol and Beth Weninger.

Art with an Iowa connection
“It so happens that my grandparents were peasant farmers in Slovenia,” Orazem said. “They would hand cut hay and dry it in the field. When it was dry, they’d rake it and load it up in a wagon by using pitch forks to hurl it over the side. I thought it would be nice to get a painting of people haying by hand like they did.”

He found just such a painting by Louis Lundean. Though he didn’t know the artist at the time, he later discovered that he’d been born in Council Bluffs, Iowa.

Then, during a visit to the library, Orazem found the book, Iowa Artists of the First One Hundred Years, published in 1939 by Zenobia Brumbaugh Ness and Louise Orwig. The book inspired him to see how many works of these Iowa artists he could find.

“I haven’t actually got a Grant Wood yet, but I have a lot of the other ones in there. It turns out not very many people are collecting Iowa-born or -related artists and so you can pick up some things. That’s how the collection started.”

Many of the artists listed in the book were part of the WPA (Work Projects Administration) during the depression in the 1930s. The WPA was a New Deal agency that provided work for unemployed Americans, including artists.

“I’ve always loved those WPA painting projects—you can still travel through Iowa and see all these murals. It turns out a lot of the artists who were commissioned to do those paintings were from Iowa. So a lot of the ones that I look for were muralists.”

A favorite piece
Orazem claims that his favorite art piece changes with the day.

“I don’t have any one particular type of art that I prefer. I’m red-green colorblind so I’m not sure that I’m as keyed in on color as I am emotion. If you get an emotional response from a painting, I think that’s what you’re looking for.

“Some days you need a painting to get you out of a sour mood, some can do that. Others are calming. Some give you a memory of something—a lot of the farm scenes remind me of my heritage from my grandparents.”

“Others are just beautiful and suck you in. Some of the portraits I think do that. For instance, the little boy—there’s something about him. And the old man sitting at the window, you kind of want to know who he is, what’s he thinking. And the multimedia one that a lot of people seem to like. There’s a whole story there with those little snippets of paper in the background. Sometimes these things start generating stories because they’re interesting, so that sort of captures the imagination.”

Cotter, who has selected art for public spaces for the Ames Public Art Commission said, “I was happy to join Peter in this project. Seeing what artists with an Iowa connection have created has been rewarding.”

“For me, seeing a piece of art can change my perspective, even if only briefly, during a busy day. My favorite piece is The Entrance by William C. Palmer. I like his use of planes and subtle shades of color to give the building its shape and an atmospheric feel. I want to sit on those steps and explore that building.”

A tradition continues
Orazem is proud of the fine art tradition at Iowa State, which has one of the largest campus public art programs in the United States. The small gallery in Heady is part of the more than 2,000 public works of art that make up the Art on Campus Collection located in buildings, open spaces and classrooms. Some of his favorites are the Grant Wood murals at the Parks Library from the 1930s.

“The 1930s were amazing years for our department. T.W. Schultz was here. George Stigler was here, and shortly after, in the 40s, Leo Hurwicz and Ken Boulding. All these guys were really good when they were here, and they got really famous after they left.”

“You kind of hope that people will be able to say that these paintings were done when economist Dierdre McCloskey said that Iowa State had the second best economics department in the world.”

“You know we won’t be the second best economics department in the world any time soon, but we can always get a little inspiration when we remember. It’s nice to know that we can have art here that resonates with when we were at the top of our game. You always want to aim for that. I kind of think of those paintings as a mark of that era.”