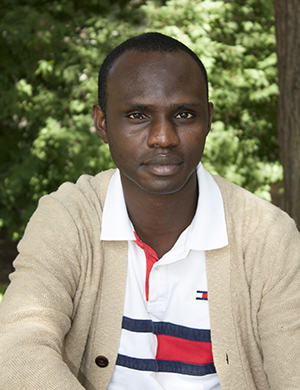 The Fellowship is the flagship program of the Young African Leaders Initiative, which empowers young leaders from Sub-Saharan Africa through academic coursework, leadership training, and networking opportunities.

Olaniyi grew up in Nigeria, the last of five children in his family. The son of two teachers, he intended to study computers and engineering when he started the pre-degree program at Lakoke Akintola University of Technology in Ogbomoso, Nigeria. But due to a mix-up in registration, he was admitted to study agricultural science instead, a subject he found so fascinating that during his second year of studies, he started his own poultry farm with 30 chickens. With help from his family, he continued growing the enterprise to 600 birds. Olaniyi completed his studies at the university, earning a bachelor’s degree in agricultural economics and extension.

While Olaniyi was serving his year in the National Service Corps, Nigeria launched a program designed to encourage youth entrepreneurship. His business proposal was one of the 1,000 accepted out of 100,000 submissions. With the $50,000 grant, he expanded his business from 600 to 5,000 birds, added employees, and commercial vehicles.

“There is a vast number of workers in Nigeria who are underemployed, working far below their skills just to make an income,” Olaniyi says. “The productivity of the country is low and the population is outgrowing the production. What are our country’s plans? What are we producing? How do we intend to feed this population? If we can bring mechanization to agriculture in Africa, we will be fully prepared for the population that is coming. It will not work to simply look for food for the present population. We must look with tomorrow in view.”

In addition to the Fellowship Institute and Summit, beginning in July, Olaniyi earned a place in a select group remaining in the United States and participating in a six-week professional development experience here at Iowa State. He is meeting with organizations and people who share their expertise in the workplace, and are willing to build relationships, offer grants, and other opportunities to aid his work in Nigeria.

“I met Ebby Luvaga, who is a partner to the USDA through the International Research and Exchanges Board (IREX)." IREX was established in 1986 by leading American universities with support from the Ford Foundation, the American Council of Learned Societies (ACLS), the Social Science Research Council (SSRC), and the U.S. Department of State.

"Ebby has introduced me to people who can connect me with others who can help me achieve my goals at home. I've also been going to classes and conferences and giving presentations.”

In Nigeria, Olaniyi managed his two farms in Osun and Nasarawa states, worked as an extension agent, training local farmers to improve their agricultural yield, and partnered with government agencies and international organizations to supply fertilizer and improved seed varieties to farmers. In his efforts to reduce poverty and unemployment in his native country, Olaniyi worked with youth and women in agricultural enterprises, connecting them to resources they need to succeed.

When he returns home September 16, he will use all he has learned and the connections he’s made to help him in his work to decrease unemployment, increase local production to reduce food importation, and help his native country feed her growing population.