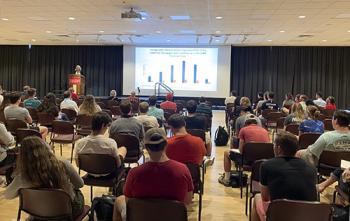 Several members of the Economics Club attended a lecture by Kerry and Linda Killinger Sept. 29 in the Memorial Union Sun Room.

Kerry and Linda Killinger presented "Nothing is Too Big to Fail, How the Last Financial Crisis Informs Today," with their thoughts on what was learned from the financial crisis that started the Great Recession, emergency initiatives taken by the Federal Reserve in 2008 and 2009, and the subsequent passage of new regulations governing banking and finance. 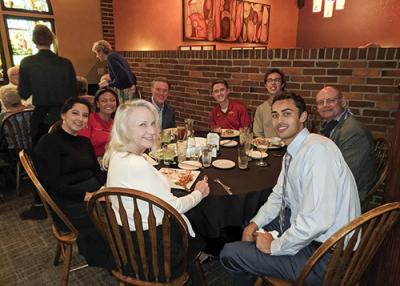 Kerry Killinger was President and Chief Executive Officer of Washington Mutual Bank, the sixth largest depository bank in the country in 2008 before it was taken over by JP Morgan. He graduated with honors in business and holds an MBA from the University of Iowa. He currently serves as the CEO of Crescent Capital Associates in Seattle.

Linda Killinger was Vice Chair of the Federal Home Loan Bank of Des Moines, and Chair of its Audit/Finance Committee. She was the publisher and editor of Overseas Business Magazine. Prior to that, she was appointed by Governor Robert D. Ray as Director of Administration for the Iowa Department of Human Resources, and by Governor Tom Vilsack to chair his committee for a comprehensive housing strategy for Iowa. She has a bachelor's degree from Iowa State University and an MBA from Drake University. She is currently CEO of Olympic Consulting Group.

In 2002, Linda and Kerry founded the Kerry and Linda Killinger Foundation, which has the mission of public policy reform and social racial justice, building comunity and access for the arts.

The presentation was sponsored by the Iowa State University Committee on Lectures, funded by Student Government.